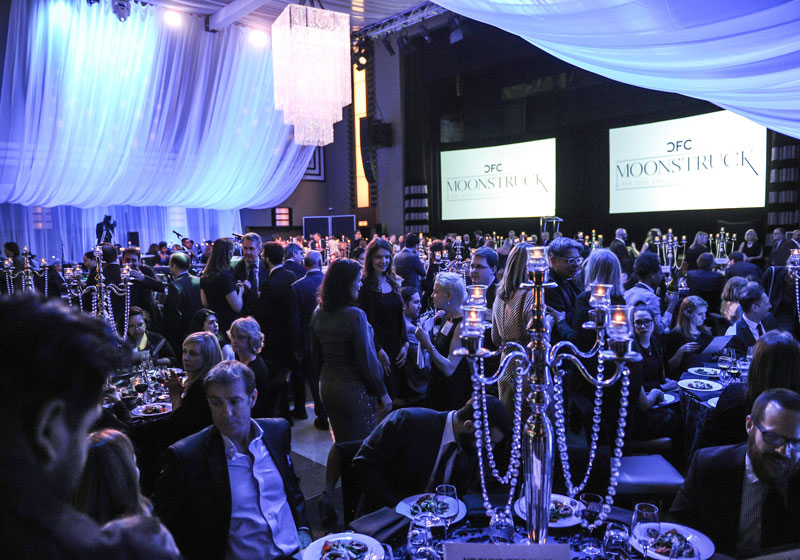 “Loretta, I love you. Not like they told you love is, and I didn't know this either, but love don't make things nice – it ruins everything. It breaks your heart. It makes things a mess. We aren't here to make things perfect. The snowflakes are perfect. The stars are perfect. Not us. Not us! We are here to ruin ourselves and to break our hearts and love the wrong people and die. The storybooks are bullshit. Now I want you to come upstairs with me and get in my bed!”

This infamous line said by Ronny Cammareri to his love, Loretta, is from CFC founder Norman Jewison’s multi-award-winning film, Moonstruck, the film we celebrated at our 22nd Annual Gala & Auction last night, Wednesday, February 3, 2016 at The Carlu in Toronto. Presented by The Slaight Family Foundation, Cineplex Entertainment and NBCUniversal, the 2016 gala shone the spotlight on this popular film as a reminder of the power of storytelling and the joy that film brings to individuals all over the world. The Annual Gala & Auction is CFC’s biggest fundraising event; this year’s gala set the record for the most funds raised towards CFC’s film, TV, music acting and digital media programs, which help develop and accelerate the careers of Canada’s creators and storytellers.

This year’s theme paid tribute to one of the foremost works of renowned filmmaker Norman Jewison – one that truly epitomizes outstanding filmmaking from script to screen, and everything in between. Norman Jewison shared some remarks about this year’s gala theme with guests through a special taped message that played at the event, “This year, we’re honouring a film I made many years ago called Moonstruck. You know, when you think about it, it had a great story, fabulous performances, terrific music, brilliant editing, a wonderful screenplay, fantastic production, and adequate direction … but it went on to win the Academy Award. It’s something that is very close to my heart, and this is what we’re celebrating tonight, and what we celebrate at the [Canadian] Film Centre – passion, love, commitment, and a little magic.”

As the event began, a veritable mix of some of Canada’s top screen-based entertainment talent, luminaries and philanthropists stopped for pictures on the red carpet before filling the halls of The Carlu’s Grand Foyer and Round Room for a mix and mingle during the cocktail reception. After sampling some of the custom Moonstruck cocktails and snacking on provisions at the antipasto station, guests perused the luxurious Silent Auction offerings of this year’s gala, which included an array of experience packages sure to satisfy TV lovers with set visits to hit series Orphan Black, Schitt’s Creek, and Murdoch Mysteries, as well as tickets to live tapings of The Marilyn Denis Show, the Rick Mercer Report and The Social, among other priceless “Money Can’t Buy” packages. Additionally, the Silent Auction featured a selection of luxury items and designer goods from David Yurman, Michael Kors, Gucci, Alexander McQueen, Manolo Blahnik, Armani, Canada Goose, and more. 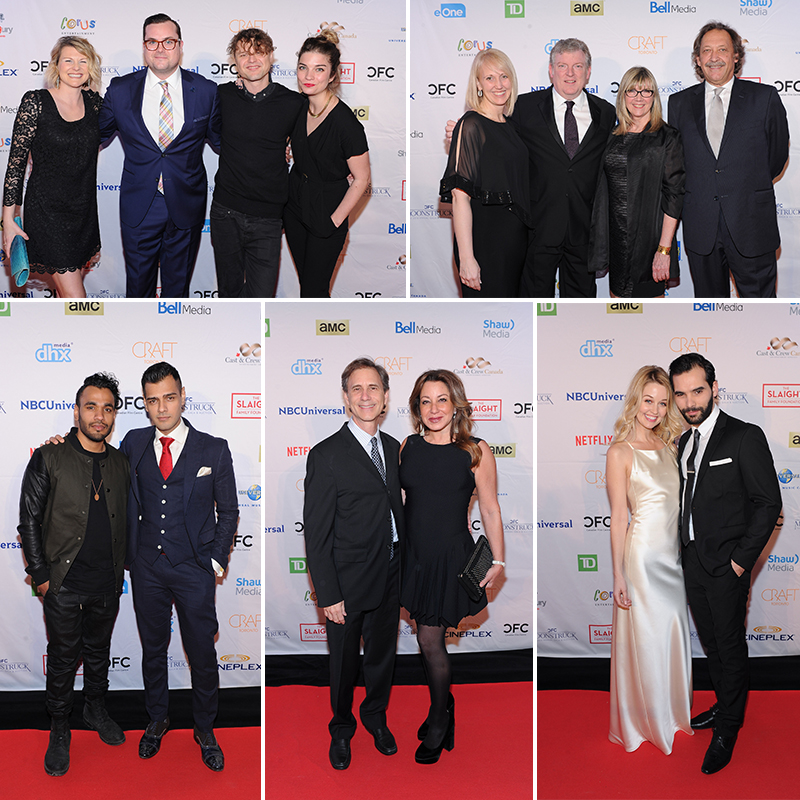 As guests were called to sit for dinner, CFC Board Members and Gala Chairs Christina Jennings (Chairman & CEO, Shaftesbury), Harold Gronenthal (Executive Vice President, Programming and Operations, AMC Global and Sundance Channel Global) and Alex Bellamy (Partner, GTA Lead, Media & Entertainment, KPMG) took their spots on stage in the Concert Hall to preside as the evening’s Masters of Ceremonies and to introduce the evening’s lineup of exceptional musical performances, who serenaded guests as they enjoyed their sumptuous dinner by Oliver & Bonacini. The first performance was by our current Slaight Music residents – Armen Bazarian, Ava Kibalian, Casey Manierka-Quaile, Dillon Baldassero, Emily Klassen, and Lisa Conway – who performed “Don’t Make Me Over”, a song written by Burt Bacharach and Hal David, and made famous by the brilliant Dionne Warwick. Next up was Toronto’s Lucas DiPasquale (courtesy of Universal Music Canada), followed by Jillea (courtesy of Slaight Music), whose powerful vocals filled the Concert Hall as she sang Sia’s “Elastic Heart” and her new single “Shattered”. A surprise performance from renowned Canadian soprano, Measha Brueggergosman, accompanied by Bill King on piano, capped off the performances. 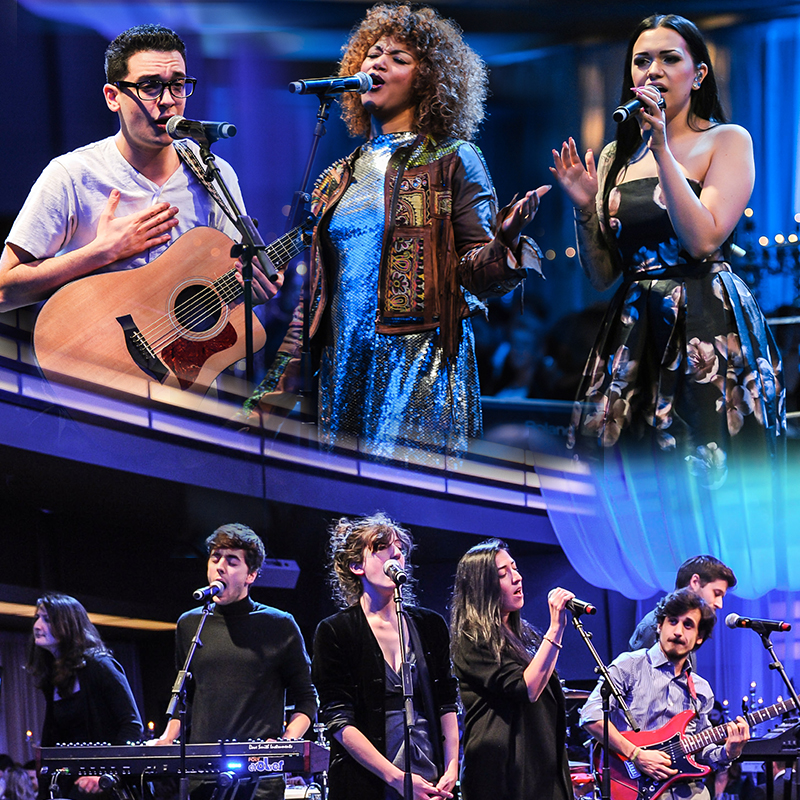 The end of dinner and the performances marked the start of the Live Auction, which featured amazing experience packages including tickets to see The Graham Norton Show live in London; tickets to AMC’s The Walking Dead Season 7 Premiere Event; a trip to Los Angeles to enjoy the Season 10 live finale of CTV’s The Voice; a $10,000 shopping spree at Holt Renfrew, complete with a personal shopper and lunch for four at Holts Café; a private screening of a Warner Bros. movie at the luxurious Shangri-La Hotel Toronto; courtside tickets to a Toronto Raptors game against Utah Jazz; and a trip to NYC for the exclusive premiere event of Allegiant, the third instalment in the popular Divergent series.

Following the Live Auction, guests were invited to indulge at the dessert bar in the Round Room and to get creative by giving their best Cher impression in front of a custom Moonstruck Instagram wall, complete with a huge moon and a Toronto cityscape.

CFC’s 2016 Annual Gala & Auction was made possible thanks to the generous support of many wonderful sponsors. For a full list of sponsors of this year’s gala, please CLICK HERE.

Want to see more photos from the gala? Visit our Flickr page.

Thank you to all of our guests, sponsors, donors and volunteers who helped make CFC’s 22nd Annual Gala & Auction a brilliant success. 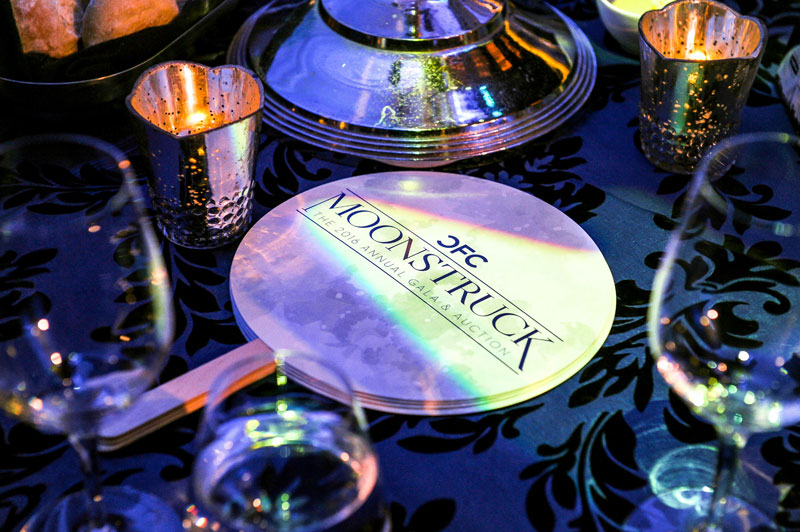