A Conversation With Liam Titcomb 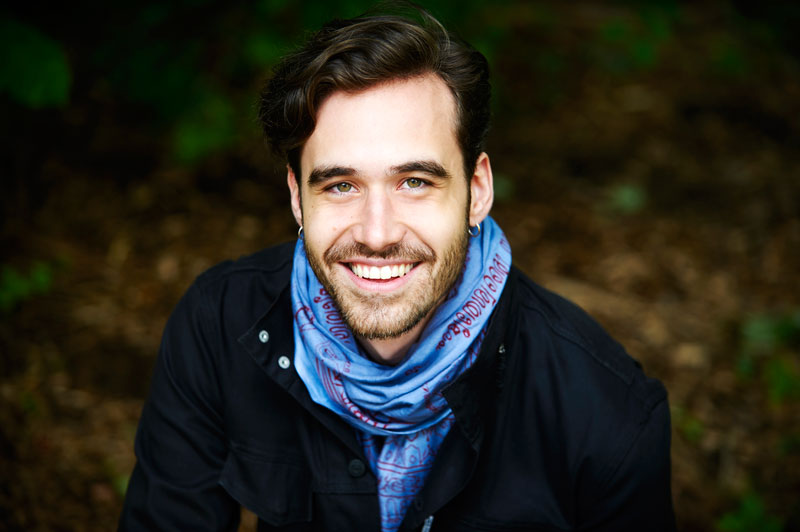 Liam Titcomb recently completed his songwriter residency in the CFC's Slaight Family Music Lab, and the acclaimed singer/songwriter credits the program as a crucial component in the "makeover" of his creative career.

At 28, Titcomb is a well-established artist on the Canadian scene. The son of noted folk musician and songwriter Brent Titcomb, he released his self-titled debut album on Sony Music in 2005, and subsequent albums Can't Let Go (2007) and Cicada (2012) confirmed his status as an eloquent songsmith.

He joined Rufus Wainwright, Glen Hansard and Kathleen Edwards in the Luminato tribute to Joni Mitchell at Massey Hall in 2013.

We recently chatted with Titcomb over coffee near his Toronto home, just prior to his relocation to Nashville, where co-writing will be a priority.

HOW DID YOU HEAR ABOUT THE CANADIAN FILM CENTRE RESIDENCY?

Liam Titcomb: My situation with [record label] Nettwerk finished and I wondered what I was going to do next. It was one of those down periods artists go through - so what now? I wanted to take a break from my own stuff. It was the first time in my life I'd felt that. I just wanted to step back and not force the singer/songwriter/artist side, though I was still wanting to make music.

Derrick Ross of Slaight Music sent me a link to the CFC and said they wanted to nominate me for it. That was the first time I really learned about it. It sounded perfect - they take three songwriters and three composers each year. I'd be learning new skills but not with the identity of Liam Titcomb, singer/songwriter. I'd acted quite a bit when I was younger [in such TV series as Strange Days at Blake Holsey High and Wild Roses], so I've always had a love for film and TV and the whole process. It [the residency] sounded perfect, and exactly what I needed. I applied and got in through their rigorous process. They send applicants a piece of film that you have to write a song for.

DID THE EXPERIENCE LIVE UP TO YOUR HIGH HOPES?

The calibre of people you get to speak with is incredible. Marc Jordan was the Songwriter Chair during my residency. I already knew him, and it was great to have him there. Lesley Barber, an incredible Toronto-based composer, was a mentor. Great engineers, mixers and composers all came in. Darren Fung, who is now living in L.A., was also involved.

The first two weeks of the program are very intense. Darren was our guide through all that, taking us to meetings and settling us into the process. A great guy. Then they take us to L.A., and that was a huge eye-opener. I've spent time there as a songwriter, but to go and sit down with American composers and managers of composers, heads of networks, music directors - it was just incredible. We had genuine and candid conversations with all these people.

We also got to score pieces that all the other residents created. I got to make my short film as a showcase piece, with a new song, "Fears."

All the directors, producers, writers and actors had their own short pieces, so our program would run through all their programs too. We scored all those pieces. That was really interesting and educational. They try to run it like the real world too, meaning lots of stress! A very interesting experience and I learned a lot. 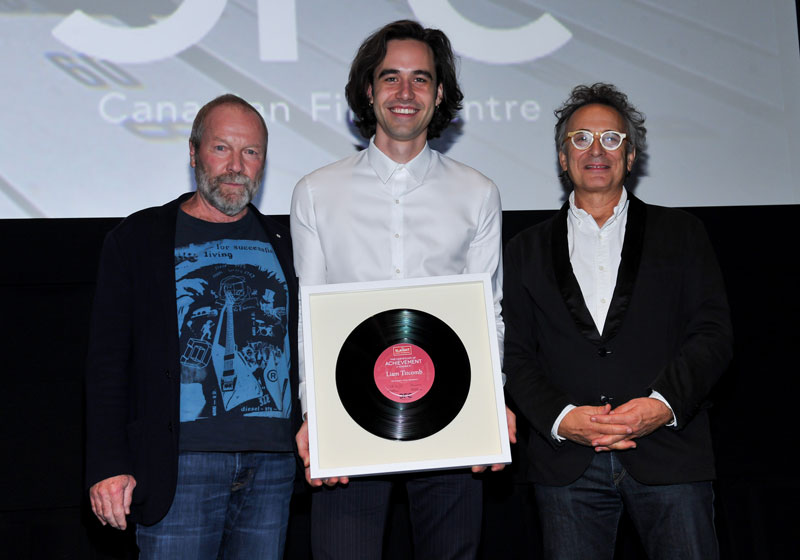 YOU'RE EXPERIENCED AS A SINGER/SONGWRITER, BUT THIS WAS NEW TERRAIN FOR YOU?

Yes, here it was about serving the picture. When I make music it is about 'do I like this? Is this good for me?' It goes through that filter every time. For this, it is 'is this what the director and producer want?' Does this make the scene better?' The piece may be something I love, but if the director or producer says 'this is not quite what we envisioned,' then I have to put my ego aside and say 'cool, let's change it.' That is a great exercise as a creative person, to remove yourself from that part of the process.

HAS THIS EXPERIENCE GIVEN YOU THE CONFIDENCE TO WRITE INSTRUMENTAL MUSIC AS WELL?

That's on the table like never before. I started in music on the fiddle and my biggest teacher was [late acclaimed violin virtuoso] Oliver Schroer, so that was wild instrumental music there. I grew up playing his music. Now I realize I have the ability to do this, so should the opportunity arise, maybe I'll make music like that, as a side project. I know Oliver would be thrilled.

ARE YOU PART OF A WRITING TEAM FOR OTHER ARTISTS NOW?

Not so much a team, but I'm endeavouring to go more down that route. I'm now walking into situations where it is more 'let's try to write this kind of song and just write the best type of song to suit that genre or artist.' I'll still write for myself. I'm between albums and I'm still exploring that. Writing for other people has been a great exercise.

DO YOU HAVE REGULAR CO-WRITERS IN NASHVILLE?

Yes, I have a few. I'm still a bit new to Nashville in terms of spending a lot of time there. I have done my last two albums there, but now the plan is to spend more time there regularly. I do have some people I go back to there.

One of my friends is Jason White, a brilliant writer. A real wordsmith, and rather a folksinger at heart, one with a great grasp of the English language. He's a lot of fun to write with. He had a cut with Tim McGraw, and that happened when Tim heard the song on the radio and he wanted to cut it. A song called "Red Ragtop," a big hit. And now he has the title track on Carrie Underwood's new album, "Choctaw County Fair." I love working with him. Jay Joyce I've worked with a lot, but he is so in-demand [producer/writer Joyce has worked with Emmylou Harris and the Wallflowers]. He has brought a real different approach to Nashville, but now on a mainstream level. I learned a lot from him.

Daniel Tashian is another guy I work with, he's in a band called Silver Seeds. He's regular co-writer of a lot of the songs on the show Nashville now. Kate York is another friend of mine. I've rather lucked into working with a small group of writers that are a big part of the show. One of the musical directors there is Colin Linden, from Toronto, and I've known him all my life. It is great to have him there, always asking 'is everything OK?' I'm reconnecting with a lot of people there now. I have just signed a publishing deal, but I can't really talk about it yet. It feels like a really good situation.

IS THE PLAN TO RELOCATE TO NASHVILLE AT THE END OF 2016?

Yes. I have a work visa and do plan to spend more time there. That's probably something I should have done years ago, but as Canadians it is hard to make that commitment. We feel a loyalty to Canada, but I think I've reached a point in my career, and the CFC really helped too, where now is the time to go and have adventures like this and invest time down there.

Stylistically, do the songs you write for others now range through pop, country and folk?

What is realistic to expect is country music and pop music. The more Americana or rootsy things, I write for myself. The closest I've ever come to anyone else cutting my songs was on my second album, the title track "Can't Let Go." Mickey Raphael, who is Willie Nelson's harmonica player, played on that song, and on the whole record. We mixed it quickly and he said 'I'm driving to Texas to work with Willie, can I have a copy?' Of course I gave it to him and he called me a week later and said 'I played that song for Willie and he loves it and he wants to put it on the list of songs he's considering for his next album.' I lost my mind! What an honour. They were going to cut 20 songs and choose 10. Mickey said with Willie getting older, they only cut 10, and the song didn't make it. I got close though!

I do love pop. I don't have a huge love for country music, but I have an appreciation for it, the incredible craftsmanship of it. I enjoy that part of it. I always want to inject a little of my personality or a certain consciousness into my lyrics.

Yes, and that comes from CFC, as my showcase piece. The idea was this had to accompany film, and not just be a music video. It had a different end goal. It's not really part of a collection of songs, so I just put it out there. CBC has picked it up.

THERE HAVE BEEN UPS AND DOWNS IN YOUR CAREER. EVER THINK OF CAREER OPTION B?

All the time! Three or four times a year, and usually seriously once a year. Usually around Christmas when the business slows down and there is no feeling of momentum. I have a huge breakdown around that time every year, then you pull it together and keep going. 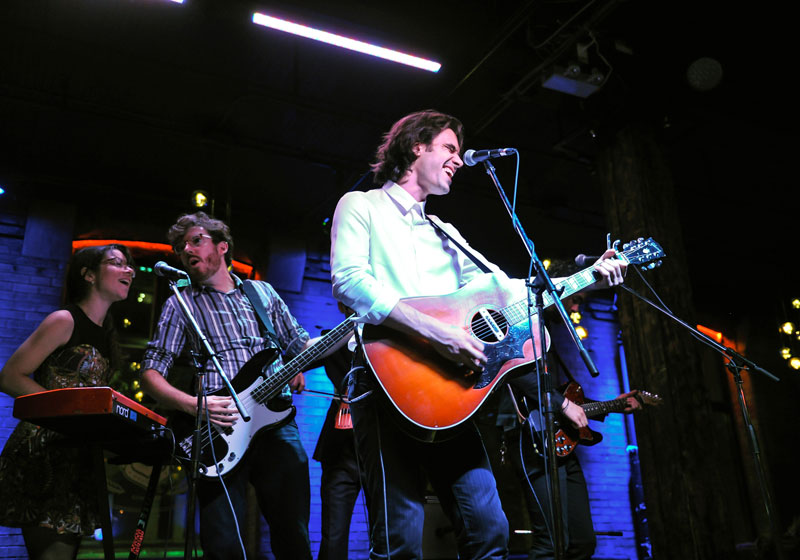