The Academy of Canadian Cinema & Television today announced six Academy Special Award winners for the 2016 Canadian Screen Awards. Among them is our very own Chief Digital Officer (CDO), Ana Serrano, who is being honoured with the Digital Media Trailblazing Award; and our alumna Karen Walton, who is this year’s recipient of the Margaret Collier Award (for Writing). This marks the third consecutive year that a CFC alumna was awarded with the Margaret Collier Award. CFC alumna Tassie Cameron was the recipient of the 2015 award and Semi Chellas was presented with the 2014 award.

Academy Chair Martin Katz had the following to say about the six award recipients, "Each of these outstanding Academy Special Award winners has made innovative and stellar contributions to our Canadian screen-based industries. We are extremely proud to celebrate them and their ongoing achievements at the 2016 Canadian Screen Awards." 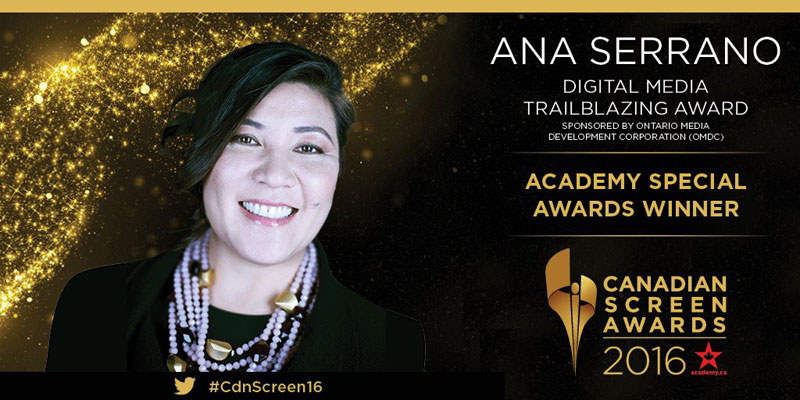 Ana is not only CDO here at the CFC, but she is also the founder of CFC Media Lab, our world-renowned and award-winning institute for interactive storytelling that was created in 1997. Ana is driving the digital transformation of the CFC into a unique blend of talent, product and company accelerator, and creative production house. Most recently, she launched Canada’s first digital entertainment accelerator, IDEABOOST, with founding partners Shaw Media and Corus Entertainment. To date, Ana has directed the development of more than 130 digital media projects, mentored 50+ startups, and has received numerous awards from the digital media, film, and theatre industries in both Canada and the U.S., including a DigiAward for Visionary of the Year, a Best Canadian Feature Film Award from the International Reel Asian Film Festival for her own transmedia production Prison Dancer: the Musical, and a Jim Blackaby Ingenuity Award for Body/Mind/Change. We are so proud of Ana’s many accomplishments, and we look forward to celebrating her success at the Canadian Screen Awards in March 2016. 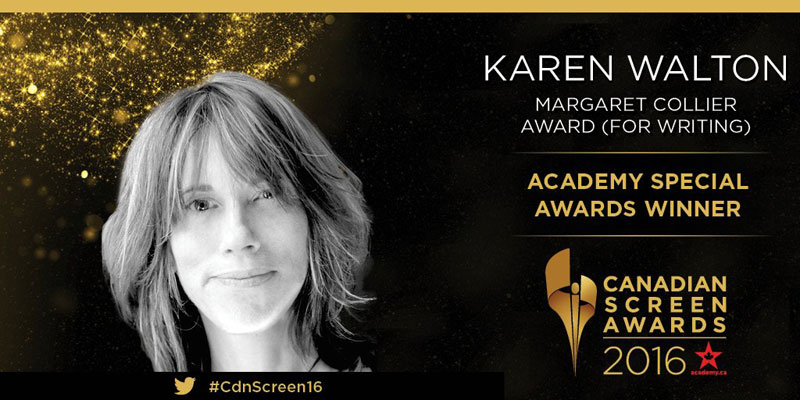 Karen is an award-winning screenwriter and creative producer whose credits span an eclectic array of popular, critically acclaimed and groundbreaking film and television works. To film lovers, she’s the sardonic scribe behind the international cult horror classic, Ginger Snaps. In television, she’s been in the earliest writing rooms for game-changing series such as gay culture classic Queer As Folk, and science fiction sensation Orphan Black. Her additional credits include the Gemini Award-winning movie-of-the-week script for the true rape-culture saga, The Many Trials of One Jane Doe, biopic Heart: The Marilyn Bell Story and six other original drama series, including Flashpoint, The Eleventh Hour, and The Listener. Karen’s unique voice and dedication to social change through innovative content has won her a Canadian Comedy Award, a special jury citation from the Toronto International Film Festival, Canadian Screen Awards for Best Dramatic Series, and the Writers Guild of Canada’s Writers Block Award for outstanding contribution to the national screenwriting community.

Congratulations Ana and Karen on these very well-deserved honours!

CLICK HERE for the original announcement and the full list of the six 2016 Academy Special Award winners.