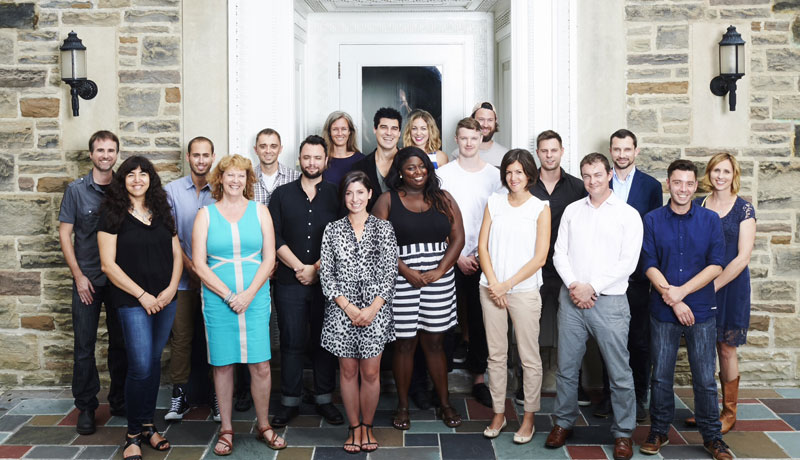 The Cineplex Entertainment Film Program hosts 350+ workshops, meetings and case studies with more than 130 guests and/or mentors annually. Now it’s time for our 2015 residents to be challenged and inspired to do their best work, explore the changing entertainment landscape, deepen their understanding of the marketplace, forge meaningful relationships and incite their entrepreneurial spirit through high-level case studies and workshops and production exercises in this truly dynamic, collaborative and professional experience.

So onto the newest group of CEFP residents! We wanted to get to know our incoming residents a little bit better, so we asked them each a few questions. We figured, what better way to get to know these filmmakers than by getting a look into their filmmaking psyches? Take some time to get acquainted with our filmmakers by reading their answers below, and keep your eyes peeled for what they get up to over the next five and a half months; it’s going to be good.

We asked our Directors’ Lab residents what story they have always wanted to tell onscreen. Here’s what they had to say:

Reem Morsi: “I always wanted to tell the story of human identity. What are those elements that control our decisions, our perceptions and our definition of who we are? […] Identity has always been an intriguing concept to me and exploring it on the screen is a fascination of mine.”

Olivier Sabino: “I have lots of stories running around in my mind […] I have always been fascinated by dark, eerie, profound and intense stories, which will scratch the depths of the human psyche. Mixing the extremes and playing with the bizarre: trying to create awkwardness and discomfort.”

Arran Shearing: “I’ve always wanted to tell the story of East Vancouver as I experience it and remember it. I want to show how relevant the stories are without embellishing in a self conscious way.”

Sanja Zivkovic: “The one idea that constantly comes to mind is telling a love story between two young adults who grew up in completely different circumstances and cultures, a Canadian girl and a Serbian boy […].”

Next up, we wanted to know what producer – dead or alive – changed the way our Producers’ Lab residents experience film:

Sage Brocklebank: “Art Linson has an amazing eclectic roster of films he has produced over the years, fromFast Times at Ridgemont High, Into the Wild, to my favourite – Heat. I’d love to buy him a coffee and pick his brain on producing …”

Matt Code: “Kathleen Kennedy stands out as someone who has embraced the dedication, sagaciousness and imagination required to be successful […] I am inspired by the adaptability and tenacity she has shown in embracing new challenges and roles throughout her career and the sheer success she has had doing it […].”

Jay Deverett: “Christopher Nolan and Judd Apatow [...] Nolan takes his films so seriously. He goes the full distance when building his worlds and never asks the audience a question he isn't prepared to answer when it's time for the story to pay off […] Apatow knows exactly how to curate talent. He serves as the keeper of the overall vision, but makes sure that just enough space is left in the script for every performer to bring their actual selves into the role.”

Sally Karam: “John Hughes – as a teenager I watched his films over and over again. The music, characters and relationships portrayed in his films were my window to a more exciting adolescence filled with mad love, wild humour and great friendships […]. Robert Evans – because through his films I began to realize the role of the producer in discovering and developing content and in cultivating and managing talent to create an unforgettable, iconic end product.“

Marc Petey: "James Cameron, although he's know mainly for directing some of (and THE) biggest films ever, it's his style of producing that places his films on the higher level. He is always on the cutting edge of technology, continually making films that seem years ahead of their time […] James Cameron truly embodies the idea that if it can be dreamed it can be filmed.“

Onto the writers! We wanted to gain some insight into whose writing and/or which scripts or films truly inspired these writers to pursue screenwriting. Their answers may surprise you:

Elizabeth Fraser: “I discovered my appreciation of books before I fell in love with film. I remember the first writer I ever adored was Dylan Thomas. I was astounded that he was breaking all the rules I ever learned in grade school about run-on sentences, and yet he yielded the most lyrical and poetic prose I had ever read at that time […].”

Jonathan Joffe: “Edgar Wright's writing ability is equal parts inspirational and intimidating. Wright's writing really brings things to the next level of storytelling that our current movie-literate generation expects. His dialogue is both realistic and witty, his ability to intertwine plots is amazing, and his screenplays never wander from their central driving theme and mood […].”

Molly McGlynn: “I'm inspired by writers who are honest, fearless and expose the cards we hold close to our chest. I like writing that attempts to answer the question "What is it like being a human for you?" Screenwriters whose work seems to have captured this essence that I admire are Nicole Holofcener, Lynn Shelton, Jill Soloway, Richard Linklater, Noah Baumbach and Lena Dunham […] I once heard that if you're a little bit uncomfortable or embarrassed about what you're writing, you're probably hitting a nerve of truth ... keep going.”

Christine Pountney: “When I was thirteen, I saw Doctor Zhivago on a big screen and spent the next three months in a kind of love spell […] Four years later, I saw My Own Private Idaho and spent another three months in a spell, but this time a bit queasier […] To love a film, I require the absolute suspension of my disbelief; I need ardour, deep feeling, intelligence.”

Shelley Thompson: "Paul Haggis' Crash. I loved the storytelling, the magic, the extraordinary sense of responsibility the filmmaker had. The altruism. I loved Birdman: the theatricality, the magic, the shooting choices and loooonnnnnggg takes, allowing the story to unwind like a spool of thread, where sometimes you lost the end. But films that have made me want to be a storyteller on screen: The Three Lives of Thomasina, Casablanca, An Occurrence at Owl Creek Bridge.

Finally, we got to know our editors a bit better by learning about what film(s) they wish they could have edited:

Christine Armstrong: “I wish I could have edited Eternal Sunshine of the Spotless Mind. There are so many different ways you could edit the film and I would have loved to play around with the footage. It was edited in such an unconventional way but has very strong storytelling elements.”

Ben Lawrence: “I would have loved to work on Michael Mann’s Heat […] Editing that one scene between De Niro and Pacino in the diner – with the whole film building up to their face-off – would have been incredible to pace. […] The action sequences have masterful camera work, providing so much coverage to work with in an edit. I felt the same way about Braveheart; the framing and editing kept you engaged with exactly what was happening, rather than just overwhelming you with rapid cutting and busy frames […].”

Chris Mutton: “If there was one film I wish I could have edited, it would be Orson Welles' The Lady from Shanghai, for its dizzy and optically fascinating climax set in a mirror maze. The shootout amongst a sea of mirrors, in which the characters desperately shoot at reflections, is brilliantly edited into a fascinating montage of flying glass and shattering images.”

Michael Pierro: “If I had the chance to edit any film from the past, I would probably have to choose one of Terrence Malick’s films, particularly The Thin Red Line. His process of improvising large portions of his films and rediscovering and rebuilding the story in the edit room would be and incredible thing to take part in.”