We are pleased to welcome four new creators into the TV series stream of the CFC/Netflix Project Development Accelerator, one component of the larger Netflix/CFC Global Project. This is the second cohort of creators who have participated in the TV series stream of the accelerator, a three-month offering that is tailored to the specific creative and business needs of the selected participants and their series concepts.

The distinct voices of these four creators, working in a wide range of genres and formats, really shone through. Their timely stories and compelling characters show real potential for widespread appeal, including reaching chronically underserved audiences hungry for original and inspiring content. Throughout the accelerator, they will receive advanced project development support to bolster the international reach of their TV series through access to creative and marketplace expertise, mentorship and activities. The 2021 TV series stream runs from November 2021 until February 2022.

There are two additional accelerators offered as part of the Netflix/CFC Global Project, the Calling Card and Marketplace Accelerators. These are yearlong accelerators, which, to date, have supported more than 20 projects, from shorts to features and TV series. Head here for more information on specific projects and participants. 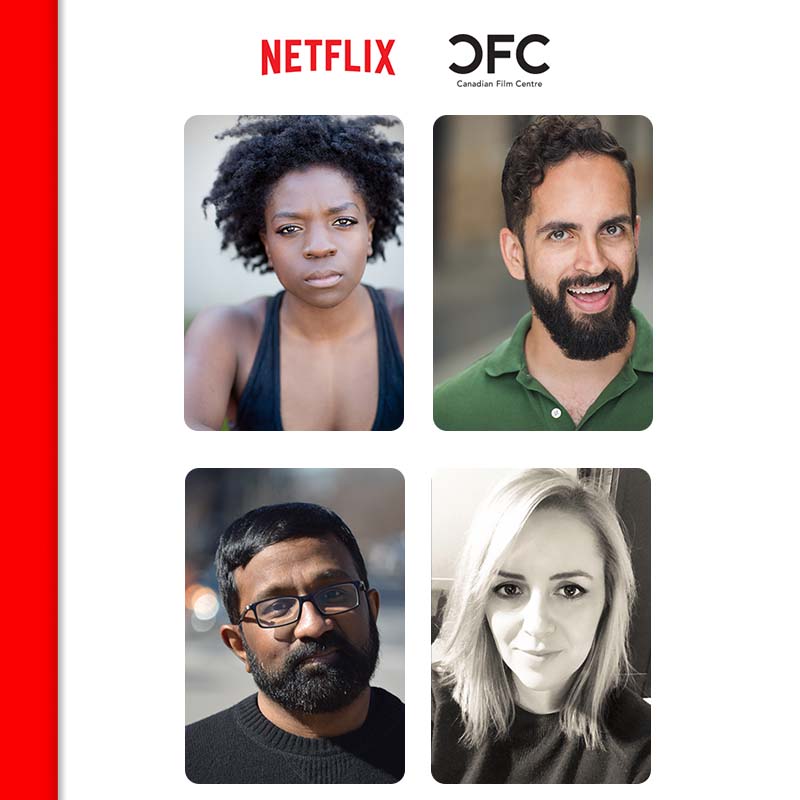 Meet the talented creators and read about their series projects selected for the 2021 TV series stream:

Toronto, 1976. When the police turn a blind eye to a vicious serial killer hunting the city’s burgeoning queer community, a disgraced gay former cop and his circle of friends must band together to stop the murders. But allies and enemies lie on either side of the thin blue line.

Alongside recent work on Coroner (CBC), JP Larocque (they/them) has written on Jann (CTV), Diggstown (CBC), Another Life (Netflix), Slasher (Shudder), and is creator and executive producer of the OUTtv digital series Gay Nerds. As a journalist, JP has bylines in The Toronto Star, The Walrus, Maclean’s, Xtra, The Beaverton and Flare. In 2021, they were selected to participate in both the inaugural WarnerMedia x Canadian Academy Global Access Writers Program and the Netflix-Banff Diversity of Voices Initiative. A proud member of the 2SLGBTQ+ and BIPOC communities, JP is committed to diversity and inclusion in all their work.

Released from prison after a seven-year stint, Ashanti King struggles with the ups and downs of societal reintegration as she pursues her singular goal: to be reunited with her son.

Murry Peeters (she/her) is an actor/screenwriter. Her recent screenwriting credits include The Parker-Andersons and Amelia Parker. Her screen credits include Taken (NBC), Far Cry 5 and My Little Pony. Murry's past acting experience enable her to write material populated by richly diverse and layered characters. She was selected to participate in the inaugural class of the WarnerMedia Access x Canadian Academy Writers Program. She is also an alumna of the Canadian Film Center's 2018 Writers' Lab, a 2018 Magee TV Diverse Screenwriters Award recipient and a Netflix-Banff 2019 and 2020 Diversity of Voices participant. Murry spearheaded #StartWith8HollywoodNorth, a program aimed at connecting industry leaders with emerging women and non-binary BIPOC creatives.

A comedic throwback to the 90s, 'July/August' follows the story of a young Tamil immigrant who’s walking a teenage tightrope of staying true to his family and his trio of artistic underdogs, as they create mixtapes and videos to give their community a voice, while keeping their dreams in focus.

Vince Kesavamoorthy (he/him) is a community-first storyteller, who is a passionate advocate for social justice at the intersection of art and technology. Together with his production partner, Dan Speerin, Vince has created content across YouTube, podcasts, film and even Myspace. The duo created three multi-platform current affairs series, tackling everything from youth culture to the 2016 U.S. Presidental Election. Vince has received support from Google, BIPOC TV and Film, the Regent Park Film Festival, and is a fellow of the Hot Docs Festival’s 2020 Doc Accelerator Emerging Filmmaker Lab.

With the world’s fleeting attention span, two aging scream queens fight to remain relevant, all while becoming unwittingly entangled in a doomsday witch cult’s plan to kickstart the apocalypse.

Jessica Landry (she/her) is an award-winning screenwriter and author based in Winnipeg, Manitoba. Her original horror feature, My Only Sunshine, was accepted into the Whistler Film Festival’s Screenwriters Lab in 2020 and is in development with Eagle Vision, with Jessica attached to direct. She’s written on a variety of TV projects, including Strays (CBC), Heartland Homicide (Farpoint Films), 7th Gen (Eagle Vision/APTN), and several movies-of-the-week with Neshama Entertainment and Vortex Productions. She’s currently adapting the bestselling novels, April Raintree (Eagle Vision) and Leaving the Witness (Sir Harry Films), for the small and big screens.

Read about the previous creators and projects supported through the CFC/Netflix Project Development Accelerator:

Applications are now open for the next features stream of the CFC/Netflix Project Development Accelerator. This initiative is for Canadian creators who are Black, Indigenous, Racialized, 2SLGBTQIA+, and/or living with disabilities. Learn more and apply by January 31, 2022 HERE.