The Canadian Film Centre (CFC) has been an essential part of Canada’s film and TV industry for more than 30 years. For nearly half of CFC’s existence, Slawko Klymkiw has been at the helm of the organization – skillfully navigating one of Canada’s leading cultural institutions through an unprecedented period of rapid growth and evolution in the screen industry, and ultimately strengthening the organization and its ability to support the very thing that inspired its creation: Canadian talent.

After a long and rewarding career in Canada’s entertainment industry, Slawko is retiring at the end of March 2021. We spoke with Slawko about his time at the CFC.

Slawko joined the Canadian Film Centre in 2005, after years of leading CBC-TV and CBC Newsworld. No stranger to the film and TV industry and deeply familiar with the role and importance of Canadian talent in the industry, Slawko came to the CFC committed to create more opportunities for Canadian creators and entrepreneurs in the entertainment business – both at home and abroad. “I saw a real opportunity when I joined the [Canadian Film] centre to increase its offerings for Canadian creators across a variety of mediums and to enhance its international partnerships,” shared Slawko. “I said I’d give it three years – and here we are nearly 16 years later. I feel truly honoured and grateful to have had the opportunity to continue building on Norman’s vision for the CFC for all these years. Norman is a true inspiration – it’s been a privilege to carry on his invaluable work of advancing opportunities for Canadian storytellers.”

"Norman is a true inspiration – it’s been a privilege to carry on his invaluable work of advancing opportunities for Canadian storytellers."

Throughout those 16 years, a number of renowned and successful programs and initiatives were launched to better position CFC alumni and Canadian creators for success in the global marketplace. “I looked at the [screen] industry to see where there were gaps in opportunities for certain types of Canadian creators and entrepreneurs,” added Slawko. Out of this, three fundamental CFC offerings were born. First, in 2008, came the launch of the Actors Conservatory, a celebrated program that remains the only full-time immersive onscreen acting program of its kind in North America. Then, in 2012, two exciting (then) new programs launched: The Slaight Family Music Lab, a creative and business experience that fully integrates composers and songwriters into the onscreen narrative storytelling process; and IDEABOOST, a vertical media and entertainment technology accelerator – and one component of Slawko’s larger vision for the CFC to marry tech and content.

(L to R): A master class with Kiefer Sutherland and the 2009 Actors Conservatory residents; Slawko Klymkiw and Gary Slaight at the launch of the Slaight Family Music Lab; the 2014 IDEABOOST Launch Pad event.

“Slawko embraced innovation,” shared Christina Jennings, Chair of CFC’s Board of Directors and Chairman & CEO of Shaftesbury. “He took the CFC from a Film Centre to a hub of excellence in Canadian content across all aspects – film, TV, digital, and the various crafts within each – acting, music, technology.”

“I am so proud of the initiatives Slawko and I worked on,” added Sheena Macdonald, CFC’s Chief Operating Officer, who is also retiring at the end of the month. “From the beginning, I was able to bring some great relationships to the CFC and Slawko was so embracing of them and the wonderful associated outcomes. There are many, but I think of Gary Slaight and how we landed on the fabulous Slaight Family Music Lab. It has been a wonderful partnership with Slawko – and key to all this is how much fun we have had along the way!”

Over the course of his tenure with the CFC, a number of additional programs, initiatives and offerings came to fruition. “We [Slawko and CFC’s executive team] looked at where the industry was headed, and adapted our programs [and offerings] as the ecosystem changed,” noted Slawko. Most recently, those offerings include The Fifth Wave Initiative, a suite of programming that strengthens the capacity of women entrepreneurs in the digital media space, and The Netflix-CFC Global Project, which fosters and accelerates diverse Canadian creators and their film/TV projects and advances international marketplace opportunities.

“Slawko has been a champion on the innovation front that has positioned CFC Media Lab as a thought leader at the intersection of tech innovation, creativity and social purpose for over a decade,” shared Nataly De Monte, Director of CFC’s Media Lab and Managing Director for Fifth Wave Initiative. “His empathetic leadership style has supported our endeavour to address patterns of exclusion in the dominant business culture by launching the first feminist business accelerator for women/womxn entrepreneurs in southern Ontario. Our pledge to have 30% representation of underserved groups in Fifth Wave is an important step towards a more equal and fair future in the digital media ecosystem.”

"Slawko has been a champion on the innovation front that has positioned CFC Media Lab as a thought leader at the intersection of tech innovation, creativity and social purpose for over a decade."

“We created many opportunities – many of which attracted significant international attention for the talent and projects coming through our programs,” added Kathryn Emslie, CFC’s Chief Programs Officer. “It has been an exciting partnership with Slawko, a partnership wherein ideas, ingenuity, creativity, passion and hard work took the CFC to Hollywood, New York, Chicago, London, Vancouver, Montreal, San Francisco, Amsterdam and Paris!” 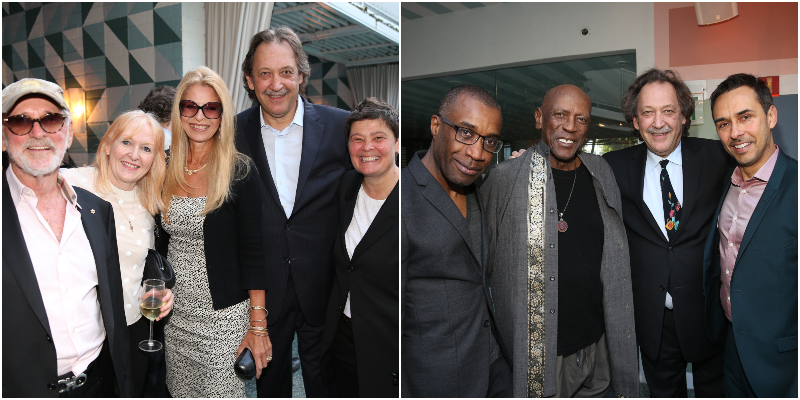 Slawko cites enhancing CFC’s offerings among the accomplishments he’s most proud of during his time at the CFC, but he also speaks with fondness of the substantial work the organization did to improve its physical space. ”I wanted to make the inside [space and buildings] work as well as our programs – to make the [Canadian film] centre better for people to work in, and to better serve the residents and creators who participate in the programs.” The CFC then embarked on a large fundraising campaign, and subsequently the $12 million Windfields Campus Improvement Project and construction of The Northern Dancer Pavilion – a key project spearheaded by Macdonald – to create a premier event venue, and vital studio and rehearsal space for residents of the CBC Actors Conservatory. “Donald Ross – whose passion for a special racehorse [legendary thoroughbred Northern Dancer] – helped us realize the Northern Dancer Pavilion, which has been such a wonderful addition to the CFC campus,” added Macdonald. 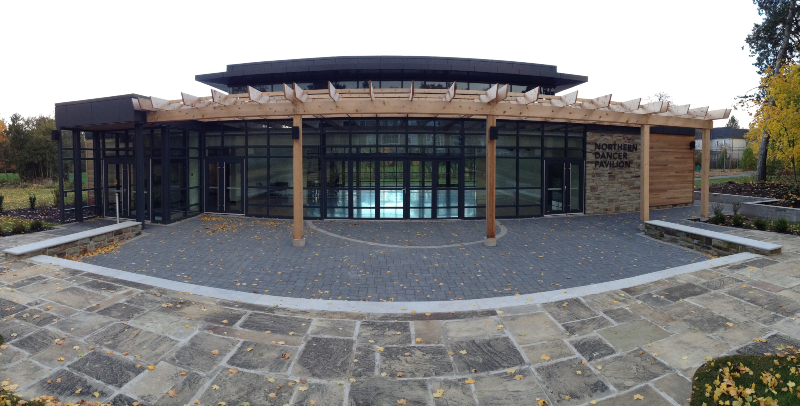 Great Canadian talent was always at the heart of Slawko’s decision-making while he led the CFC, and was one of the reasons he was so interested in joining the organization. “I had a real desire to see new [Canadian] talent emerge, grow, and make a difference in our industry.” In order to help empower and support Canadian creators in the best way possible – and ultimately help grow Norman’s vision for the CFC – Slawko looked to a few guiding questions year after year. “Every year I would ask myself and my team, ‘Where is our business going?’, ‘What does our industry need?’, ‘What are we [the CFC] doing and is it relevant?’. We always tried to stay one step ahead of our ever-evolving industry and to ensure that CFC’s offerings were responding to not only the needs of Canadian creators [in the screen industry], but to the changing nature of our business.”

"I had a real desire to see new Canadian talent emerge, grow, and make a difference in our industry."

With that in mind, Slawko also set out to continually build new and interesting partnerships for the CFC. His vision helped position the organization as a vital partner to the cultural industries, both nationally and internationally, with the CFC successfully creating strategic alliances and partnerships with key players in the worldwide entertainment business – like Netflix, Bell Media, NBCUniversal, ABC Signature Studios, AMC Networks, Cast & Crew, A&E Networks, William F. White International and Entertainment One (eOne). “Slawko understood the importance of partnerships, and under his leadership we added Netflix and AMC Networks, and of course strengthened our relationship with the Province of Ontario,” added Jennings. “He has ensured that the creators who have come through the CFC and their content is seen globally.” 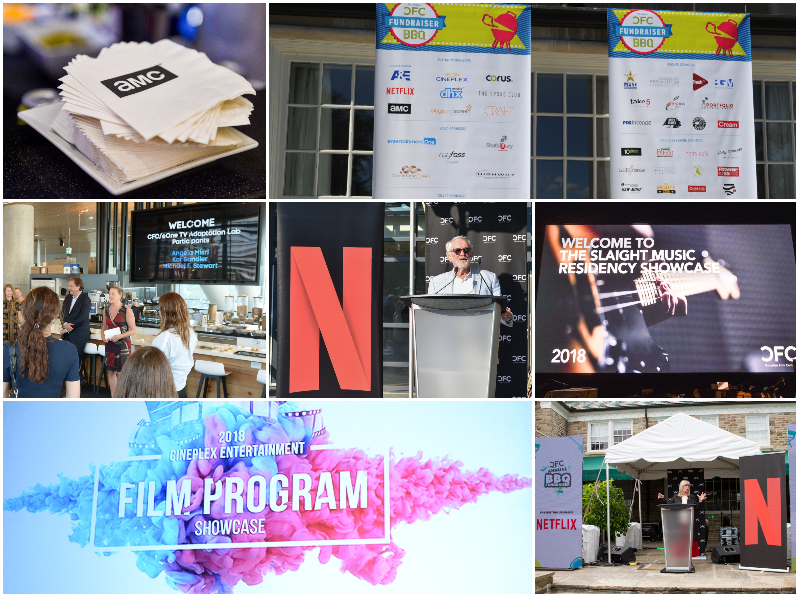 Some of CFC's partnerships during Slawko's tenure at the CFC.

Forging new partnerships wasn’t only a strategic business move for the CFC, it was also a sign of how much the industry was changing while Slawko was leading the organization. “If you want to know how much our business has changed, just look at our sponsors and partners – our sponsors from five years ago are very different than they are today.” Slawko attributes this to a shrinking broadcast industry, new technologies, changing [public and private] funding models, an increasingly globalized screen business, and an influx of new players. These major changes were accompanied by another considerable shift in the screen industry. “When I first started working in the industry, the business was preoccupied with Canadian talent telling Canadian stories,” explains Slawko. “There was almost an issue of insecurity about talent because of our proximity to the U.S. But Canadian talent has proven it can stand up on its own. They are telling all kinds of stories, and working all over the global screen industry. Our job [at the CFC] has been to increase their [Canadian creators] opportunities and to point them in the right direction – in both the Canadian and global marketplace – so they can realize their creative aspirations.”

After all this disruption, where is the industry headed next? “[I think] content will continue to drive the industry – we’ll continue to see way more and new types of content,” shared Slawko. “I think this presents a real opportunity for multiple creators and for the industry to focus on more diverse creators. It also presents an opportunity for Canadian creators – I think it [the future of the screen industry] will be the golden age for Canadian talent.”

"Canadian talent has proven it can stand up on its own. They are telling all kinds of stories, and working all over the global screen industry. Our job [at the CFC] has been to increase their opportunities and to point them in the right direction – in both the Canadian and global marketplace – so they can realize their creative aspirations."

As for what’s next for the CFC – “I hope the [Canadian film] centre remains nimble and one step ahead of the change in order to stay relevant and respond to the needs of creators and the industry,” adds Slawko. “I think that will ensure people keep supporting the [Canadian film] centre and that it will carry on its legacy of championing and empowering Canadian talent to create remarkable content and share their stories on screens all over the world.”

“The CFC is most fortunate to have had Slawko’s leadership these last fifteen years,” adds Jennings. “He leaves the CFC in a very good position ready for the next to take up the mantle.”