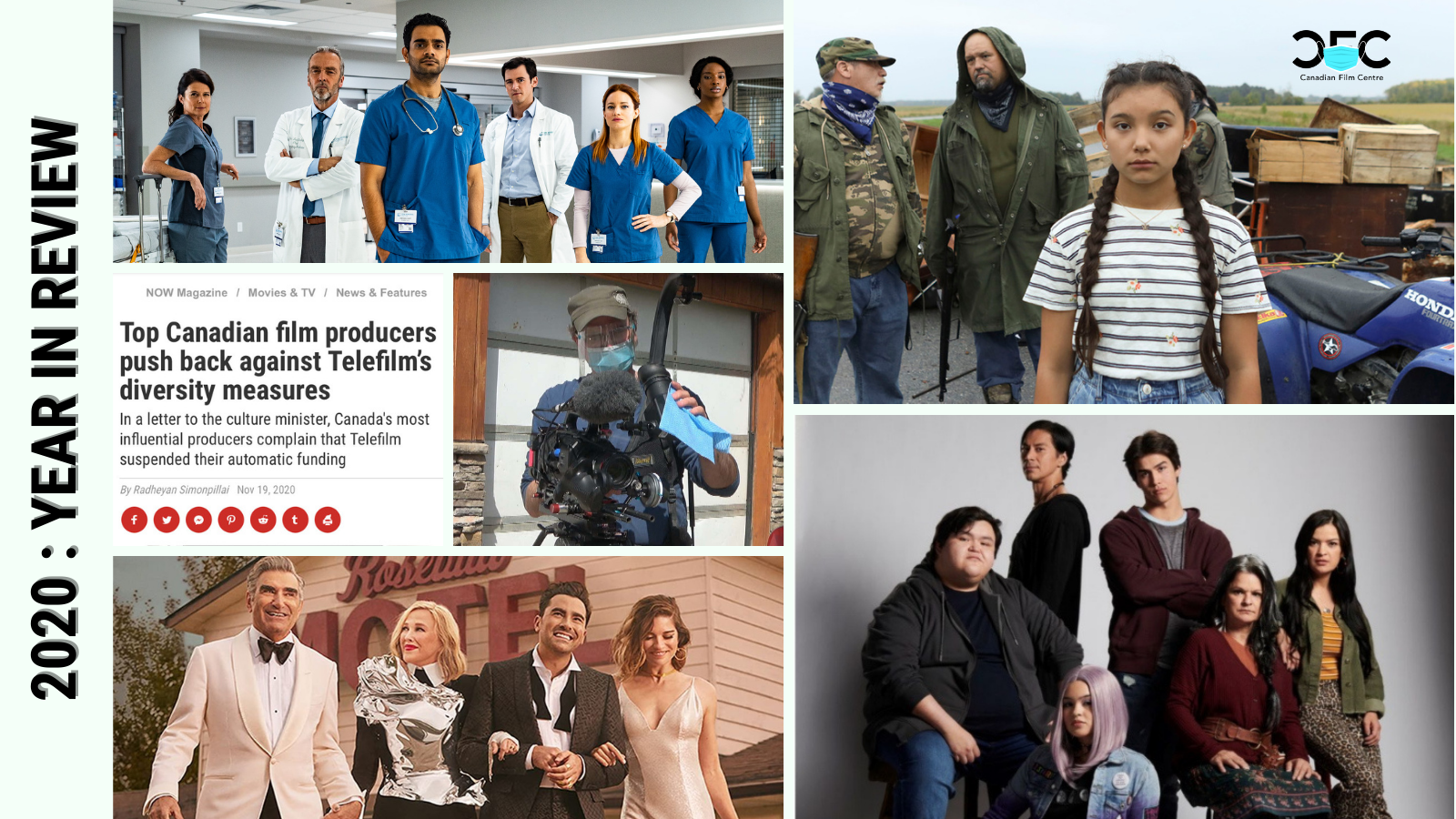 Not to be dramatic or anything but 2020 had no shortage of pivotal and life-changing events. From virtual festivals, important and overdue conversations about the state of film, and historic wins the Canadian film and T.V. industry has faced a transformation like no other, globally. The Canadian Film Centre had a front seat to the changes 2020 brought on and here are the ten events that stood out this year

Festivals, But Make It Virtual

We couldn’t hang out in person and do our favourite thing, which is watching 5 feature-length films back-to-back in packed theatres. That didn’t stop film festivals from creating viewing experiences that were unique and let filmgoers and filmmakers alike share important moments. Here is a recap of the festivals that took ahold of the opportunity.

James Bond, The Witcher, and so many more productions stopped in their tracks this year to keep people safe. Over the course of 2020, Canadian unions and organizations came together to create guidelines to bring creators back to set in the safest way possible. Here are some guidelines and resources in case you’re ready to shoot that short you’ve been working on:

Michelle Latimer and Tony Elliot bring to life Trickster, the coming-of-age story of Jared, an Indigenous teen struggling to keep his dysfunctional family above water. Based in British Columbia, Trickster is crafted and supported by Indigenous people in key creative roles throughout its production. The CBC show addresses issues affecting Indigenous Peoples in Canada. It’s humorous, dark, and delightful all at once. Trickster is going to the CW in 2021. Watch in on CBC Gem and meet the cast that’s changing the face of Canadian television.

Coming-of-age drama BEANS was named one TIFF Canada’s Top Ten features of 2020. Inspired by true events, the drama directed by Tracey Deer and co-written by Meredith Vuchnich, takes us on a journey of a Mohawk girl on the edge of adolescence who must become a warrior of her own making during the 1990 Oka Crisis. BEANS will be released theatrically in Canada in Spring 2021. We can’t want to watch it, again.

What do you get when you bring together Marsha Greene, Charles Officer, R.T. Thorne, and Annemarie Morias, CBC, and B.E.T? The Porter, Canada’s biggest Black-led television production. The Porter explores Little Burgundy, Montreal after World War I and the Black community that surrounded the porters. Four leads will bring us through this bustling world as they navigate the fight for liberation on and off the railways.

Big news! @CBC and @BET are joining forces on a series about Black porters and Montreal's Little Burgandy. Directors and showrunners Charles Officer, R.T. Thorne, Annemarie Morais and Marsha Greene tell us all about the historic Canadian production. https://t.co/1LWA26n75c

Free healthcare is heading over the border with Transplant and Nurses joining NBC has part of their new primetime lineup. In early fall, conversations brought both series to NBC as the major broadcaster worked to fill their fall TV schedule as the COVID-19 pandemic halted filming and production for much of 2020.

The little Canadian train that could. CBC’s Schitt’s Creek ran for six glorious seasons and at the end of 80 episodes, its well-loved run swept the 72nd Emmys, winning seven categories and picking up nine shiny statues, making it the most awarded comedy in a single year. Created by Dan and Eugene Levy, Schitt’s Creek explored family, LGBTQ relationships and humility in brilliant and refreshing ways. Like Patrick told David, “I’ve spent most of my life not knowing what right was supposed to feel like, and then I met you. And everything changed. You make me feel right.” You have no idea how much we agree. Catch all six seasons of Schitt’s Creek on CBC and Netflix.

More than ever, conversations about representation and what it looks like now surround the world of film. Organizations like BIPOC TV & Film and filmmakers like Jennifer Podemski are leading the change with action, creating platforms that highlight and support creators. From Vancouver to Toronto, Canada-wide, here are some of the platforms that represent Black, Indigenous, and People of Colour. If you’re hiring, take a look.

The Creation of the Black Screen Office

Eight Black Canadian creatives came together in 2020 to create the Black Screen Office (BSO), led by Joan Jenkinson as executive director. Following the creation of the office, Telefilm dedicated $100,000 dollars toward the BSO. The BSO is a not-for-profit organization whose mission is to support the development, production and distribution of Canadian Black screen content around the globe. We love to see it.

Important conversations were led by voices who cut through the noise with clarity. The second half of 2020 unearthed the needed conversation of funding and equity in the film industry. Impact-APTCMI, REMC, and Producers Pledge brought to light inequities in the Canadian Film and TV industry, in front of and behind the screen, and solutions on how to make a significant change. Highlights from Barry Hertz, Radheyan Simonpillai, and Warren Sonoda lay bare the landscape and ask us as a world to reevaluate how we’ve always functioned. Catch up on the conversation here:

That's it, that's the whole rundown. 2020 was hard in many ways, forcing us to look inside in more ways that one. The year opened doors to conversations and possibilities that are long overdue. I, for one, look forward to everything 2021 holds for our industry and the world that encompasses it.