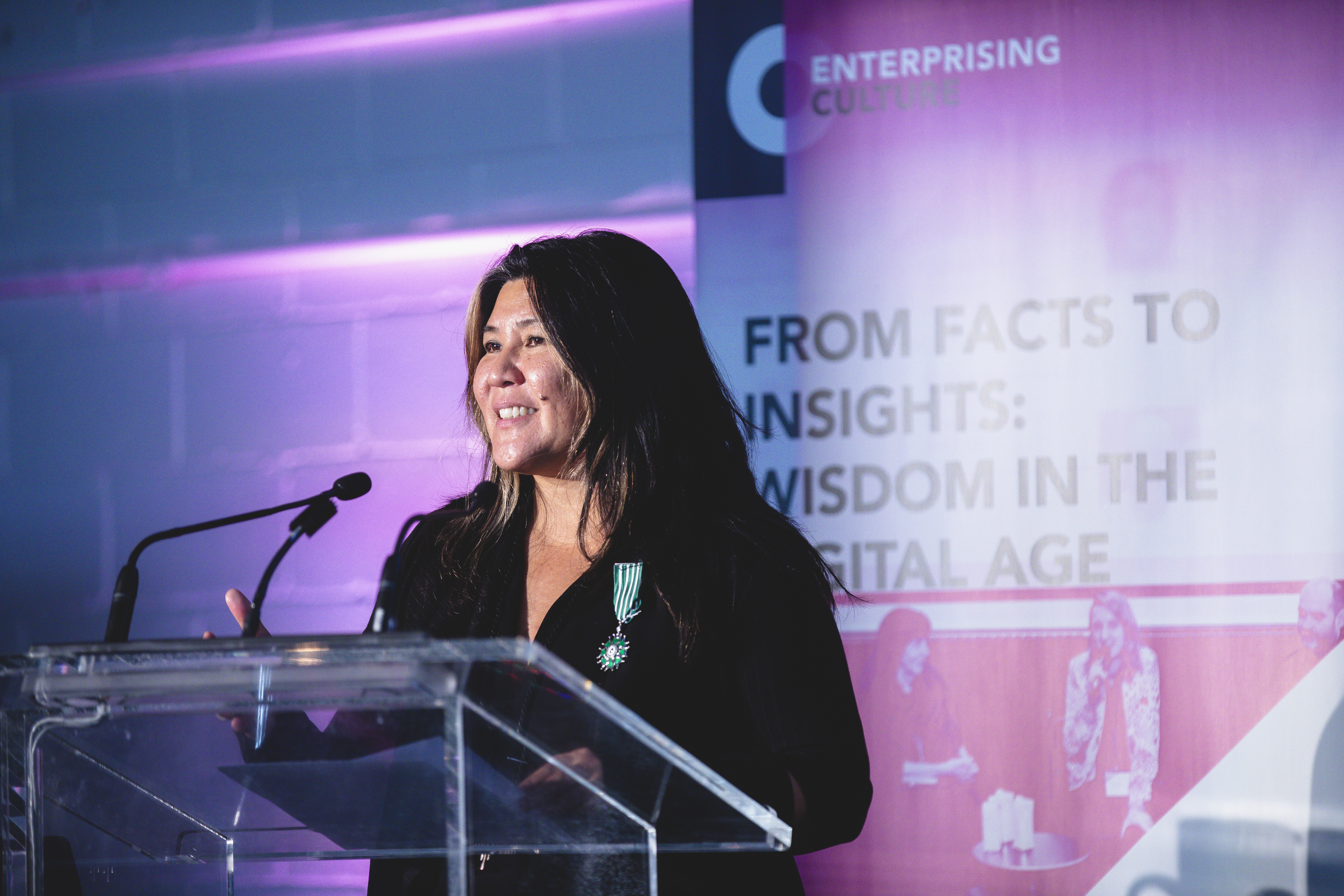 After 23 years as founder and head of the CFC Media Lab, Ana Serrano is stepping into a new role as OCAD University’s President and Vice-Chancellor. Ana has provided invaluable mentorship to countless digital media creators through programs such as Open Immersion, Digital Futures, and IDEABOOST. She now brings that passion for innovation, community building, and interdisciplinary collaboration to her position at OCAD.

Ana has received numerous accolades from the digital media, film, and theatre industries, both in Canada and the U.S. These honours include a Digital Media Trailblazing Award in 2015 from the Academy of Canadian Cinema & Television; a Best Canadian Feature Film Award from the Reel Asian International Film Festival (for her own transmedia production, Prison Dancer: the Musical); and a Jim Blackaby Ingenuity Award for Body/Mind/Change. In 2018, Ana was honoured with the insignia of Chevalier de l’Ordre des Arts et des Lettres (Order of Arts and Letters) from the French government.

With Ana at the helm, the Media Lab has produced ground-breaking immersive media projects such as: Late Fragment, North America's First Interactive Feature Film (in co-production with the NFB); Small Wonders: The VR Experience (in partnership with Seneca’s School of Creative Arts and Animation, and the AGO); and Made This Way: Redefining Masculinity, an interactive mixed-media documentary that made its international debut at the Venice Film Festival.

In 2012 Ana launched IDEABOOST, the CFC Media Lab’s business accelerator and startup community. This innovative program has helped dozens of companies build the next generation of technology-based media and entertainment products.

With such a long and illustrious career at the CFC, we took this opportunity to ask Ana a few questions about her tenure at the Media Lab. From the team she inspired so much at the CFC, we wish Ana all the best in her new endeavour. We can’t wait to see how her insight, vision and tireless passion for progress, equality and cutting-edge technology, continues to shape Canada’s creative landscape.

Q: Can you take us back to the “origin story” of the CFC Media Lab? How did it start?

The origin story of the “CFC Media lab” was actually featured in Maclean’s Magazine probably in 1997. I don’t know if it’s online anymore, or if it’s been re-digitized from print, but it was a “100 Young People to Watch” kind of thing and they made mention of my curious experience getting introduced to the Canadian Film Centre for the first time.

It all began when I ran into my friend Chris MacDonald (now President of HotDocs), who was working at the CFC at the time as head of development. We met dancing at that 90s discotheque on Dundas – I think it was called The Shed. While boogie-ing he said, “You know we’re starting this electronic thing. An electronic cottage.” and I said, “You know who should run that? I should run that!”

The following week he actually called me and left me a voicemail on my office phone at Don Tapscott’s Alliance for Emerging Technologies, where I worked. (Remember in those days you had no cell phones. Or at least I didn’t have one.) It took me a couple of months to respond (ack!). When I finally called, time was of the essence, because Medialinx (a Sympatico company) had given the Canadian Film Centre money to transform Norman Jewison’s film library into this mythical “electronic cottage.” They were launching in less than a year and they didn’t know what to launch. I returned Chris’s call and said, “I have an idea for you.”

Q: What inspired the vision for the Media Lab?

A: What was really interesting about the beginning of the Media Lab was that the whole idea of it came together so quickly. But in retrospect it may have been an easier design challenge because by the time I assumed the position of Director of MediaLinx H@bitat (that was CFC Media Lab’s first name) I had been imagining in my head for some time the ideal type of institution or program I would love to attend. (BTW, this strategy of using yourself to determine product/market fit is not always the best one.) Before they hired me, I put together a report for them that [essentially] said, “If I were you, I would do this.”

Three years before MediaLinx H@bitat was launched, the mainstream web had just been born when Netscape browser launched. So in 1997, the most industrialized set of digital networked experiences were actually interactive television trials in communities. These were telecom-funded initiatives, and the Web was still in this wild west space that had the promise of a commercial medium, but was still very much a space for experimentation . I just wanted to underscore that that’s the kind of context in which we were launching, and I say we because the creation of what is now CFC Media Lab was very much a collaborative design process between myself, staff, and the wonderful faculty.

Q: When did you know that the Media Lab was really going to take off?

Once we started attracting faculty from York University , Ryerson University, graduates from MIT and Stanford and practitioners from across different disciplines, I knew we were onto something. Faculty was always and still is the lifeblood of the CFC Media Lab, because it is through the passion, talent, networks and hard work of the staff and faculty that we provide true unbeatable value to our community. We always worked with between 10 and 12 committed and loyal faculty members and many more collaborators from industry. Even to this day, as we migrated our core business into [the IDEABOOST] accelerator program, we work with mentors, faculty members or industry players who – although they are contract – are very much part of the team. So though the Media Lab was seeded out of this “dream institution” that I had crafted for myself, it did not take off until such imaginings resonated with the faculty that we attracted and were then combined through co-creation into the dynamic organizations we have today. Indeed, cocreation is a key value at the Media Lab. We all understood that in this new digital networked environment, a diversity of people from different disciplines working collaboratively together was the only way we could crack the storytelling potential of this new medium. 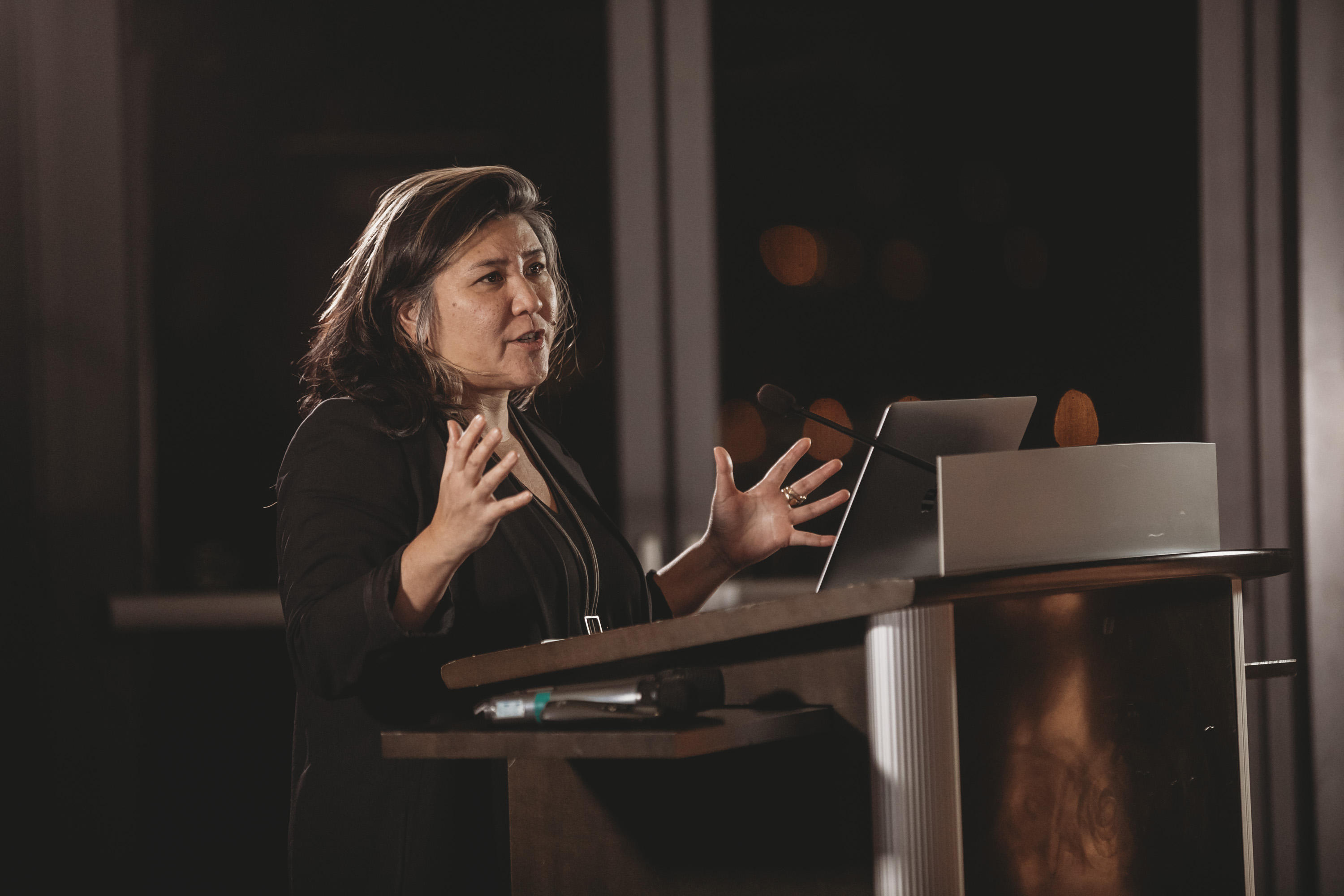 Q: How did the Media Lab handle bringing all these people from different disciplines together in one team?

A: The other thing that we did, which was quite prescient at the time, was that we knew we couldn’t just throw a bunch of different people together and expect them to work together amicably. They needed to develop skills to work as a high-performing team. So leadership training, organizational development training, and high-performance team skills development have always been part of the DNA of the Media Lab. Anyone who has been a participant in any of our programs know how much we put into the design of the experience including how to help facilitate authentic relationship building. Those who were residents in our New Media Design Programme or Interactive Art & Entertainment Program (IAEP) even went further and participated in various activities associated with personal and team development, some of which caused discomfort at times. The amount of feedback we received way after a programme ended from alumni who finally understood why conflict management or self-regulation skills were necessary always astounded me.

Now I’m pleased to see that the Media Lab is moving into even more difficult and necessary territory with anti-opression training and feminist business skills development.

In many ways, that the original Media Lab programmes had to be interdisciplinary because of the nature of the medium we were exploring, meant that we had to learn the super-important skills of how to negotiate between the needs of the individual and the needs of the team.

Q: What are some of the projects that stand out from your years at the Media Lab?

A: There were some magical moments when the right team just gelled, and they went on to produce these prototypes that became larger scale projects. A good example of that would be Shawn Micallef, Gabe Sawhney and James Roussel’s Murmur, which was one of the first locative-media projects in the world, and it became the “best practice” or “best in class” example for many, many other locative-media projects. Today, both Shawn and Gabe are leaders in the Canadian cultural sphere, digital media “influencers” if you like – not in the Instagram sense, but in the sense of big thinkers.

This program that we’re talking about has had many name changes, by the way. First it was the New Media Design Program, and then it became the Interactive Art and Entertainment program, and so on. Today, it’s the foundation for the OCAD Digital Futures program. This program has informed quite heavily the Master’s degree program at OCAD University. The reason we went that route is that when we first opened up this residential program in ’97, there were no university programs that were offering this kind of thing. Certainly not production-based, and certainly not interdisciplinary, looking at multiple skillsets, including leadership development and business skills, etc.

Q: Where do you see the Media Lab going in the future?

A: Well, the groundwork has been laid. It’s about understanding the value of collaboration, and really having that deeply embedded in our DNA, and being open – always – to all forms of collaboration, and all forms of learning opportunities. We didn’t know how to run an accelerator [when we started]. Now, I think the Media Lab runs one of the very best accelerators. Being a part of that was being able to be humble and say, “We need to learn from the best.” At that time, it was really the MARS people who were best-in-class, across a variety of metrics, so we partnered with them. But it’s also being clear on the fact that if we want to actually make innovative products and services, including our own products and services, diversity is a critical component of that. A diversity of disciples always frames how we think about building out what we’re doing. The future of the CFC Media Lab is up to them now. I’m not the Media Lab, although I was there for a very long time. It has created its own trajectory and sense of self, which is really heartening to see.

CFC Media Lab will always be family to me. Although I'm now finally downtown 😊, in reality, like everyone else I'm just a zoom call away. So if any of you need to get a hold of me, drop me a line at aserrano@ocadu.ca or follow me on Twitter @acserrano. xoxo