On Wednesday, March 11 at TIFF Bell Lightbox, the Bell Media Prime Time TV Program Showcase celebrated six wickedly talented new writers and warmly (re)introduced them to an audience of industry executives, partners and donors, cast and crew, and family and friends, and the screen industry at large.

This year’s talented group – Henry Campbell, Imogen Grace, Amy Halloran, Rose Napoli, Lori-Ann Russell and Ian Steaman – will now join an illustrious group of program alumni, who, as CFC’s Chief Programs Officer Kathryn Emslie reminded us at last night’s event, have had an enormous impact on our television-watching experience. Bell Media Prime Time TV Program alumni have written for and/or created thousands of hours of produced episodes of acclaimed series that air on Canada (and the world’s!) biggest networks. The next time you turn on your TV to one of Canada’s leading channels, you’ll likely be watching a show with CFC alumni working behind the scenes!

The Bell Media Prime Time TV Program has developed a reputation industry-wide as the go-to source for exciting, talented new TV series writers and for creating original series content for the marketplace . As Tom Hastings, Director, Original Programming, Drama at Bell Media shared at the showcase, “I think what’s so exciting about this incredible program, for me and the creative team at Bell Media, is that we’ve been able to get to know and work with so many of the residents from each of the year’s programs,” added Hastings. “I noticed that every single production that we have going on in the original programming department at Bell Media has a CFC alumnus/a. It’s really impressive.”

"I noticed that every single production that we have going on in the original programming department at Bell Media has a CFC alumnus/alumna. It's really impressive."

Hastings, along with other executives at Bell Media, has come to know the 2019 residents over the course of the program. During this time, the residents worked with a number of key industry professionals, mentors and creative leaders in order to help them master the tools required to thrive as successful writers and creators in the television industry. The mentor they worked with through the storyroom process was of course Executive Producer in Residence, award-winning writer/producer Bruce Smith.

The TV writers spent the first three months of the program working closely with Smith to develop his original series, Judas. “When I was approached about running the writers’ room at the CFC I had a project, and I wanted to do something insanely ambitious and complicated and difficult and impossible,” shared Smith with the audience at the showcase. “I came in and I gave them [the residents] an outline for a pilot, and I had a sense of where the story went for a globetrotting, spy thriller that takes place mainly in Paris and Moscow and is trilingual and … big. And insanely serialized,” added Smith. He emphasized the difficult task he presented the writers with, and how important it was that they collaborate and work together in the room in order to make the episodes they were writing individually truly fit together as a whole.

Smith went on, “It was an incredible experience. The CFC is an incredible program. The people who applied are very strong. The six who got in were, I felt, already exceptional writers. I’m happy to say all six of my writers finished with wonderfully strong results and had a real experience of dealing with deadlines and pressures and found a way to take their own talent and voice and meld it with someone else’s vision.” 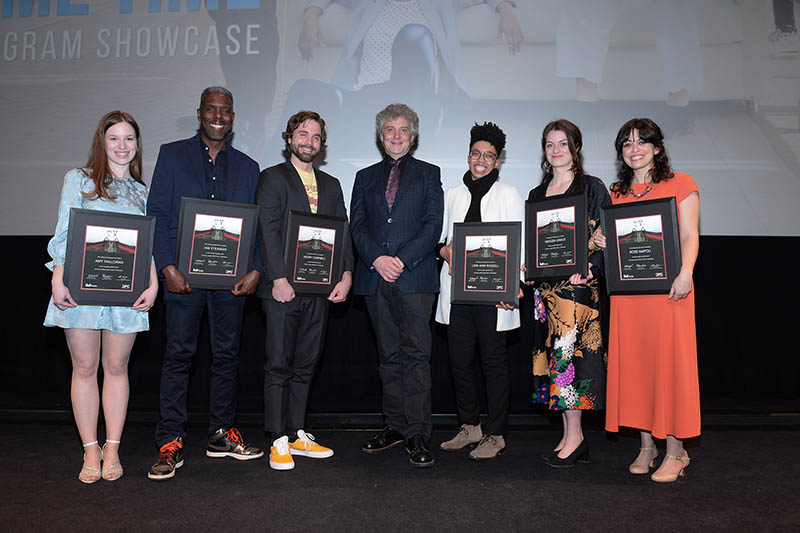 "All six of my writers had a real experience of dealing with deadlines and pressures and found a way to take their own talent and voice and meld it with someone else’s vision."

It’s safe to say these writers have the write stuff – they have what it takes to succeed in a storyroom, and to thrive in the TV business. They’re ready to go out there and take on the industry. Smith then shared some very personal and insightful remarks about each of the writers before presenting them with their certificates:

Amy Halloran: “Amy is amazingly brave in her desire to do work that challenges her and forces her out of her comfort zone. She is unbelievably reliable. There really isn’t anything that I wouldn’t ask Amy to do without a high confidence that I would get something worthwhile back.”

Ian Steaman: “Ian is a gift to a writing room. He’s like an emotional support system for everybody – plus a hell of a writer. He has a natural generosity and earnestness in a writers’ room and is able to ask the questions everyone wants to ask but doesn’t. Because of his natural generosity, he’s able to ask questions and provide criticism of other people that is constructive and you don’t even know it’s criticism – it’s so genuine.”

Henry Campbell: “Henry is a very centred, self-assured, self-critical, self-driven writer who delivers a very polished first draft. This is a very commercial, saleable gift – he writes stuff and you read it and you’re sucked in. He’s also a very generous lawyer with a lot of knowledge and expertise – and is a very obvious asset to a room.”

Lori-Ann Russell: “Lori-Ann is a walking encyclopedia of television. She knows television and loves television with a craftsperson’s passion. Lori is also a wickedly talented writer; her characters really jump off the page. She writes visually and brings you into worlds with just a few words. She has cut right to the meat of writing for the camera.”

Imogen Grace: “Imogen lives up to her name – she is incredibly graceful in the room. She’s a very thoughtful writer; she’s really thought through her writing deeply. She knows what she needs as a writer to deliver what you want … and she will deliver a script that will f****** cut you – it’s that good. She will surprise you while delivering what you ask.”

Rose Napoli: “If you’re looking to hire someone in the room, Rose is the bargain! Rose is a veteran playwright and actor, who has a lot of natural experience of what drama is – her words come off the page naturally. Rose is really awesome, she’s never needy … she never needs emotional support, she never creates a vacuum for the rest of the room to fill. Rose underestimates how ready she is for this. Rose is a real dramatist and lucky for us, she really wants to get into television.”

Afterwards, Erin Burke, CFC’s Associate Director of Programs & Content, introduced the “teasers” that were premiered at the showcase. She explained that in addition to the storyroom work with Bruce, the writers develop their own original series and write their pilot scripts. Part of that process includes writing and creating a short teaser for their series – which requires them to distill their series concept into a four-minute piece of content, which you can view below:

We were thrilled to have some of the program’s key mentors in attendance at last night’s showcase, including Original Series and Teaser mentor Amy Cameron, and teaser mentors Tom Third and David Ostry.

A special thanks to all of this year’s mentors, guests, sponsors, donors, partners and suppliers for the Bell Media Prime Time TV Program! The program simply wouldn’t happen without their continued support.

Attention TV writers! If you're interested in applying, head here for more information – applications open on Friday, March 27 and the deadline to apply is May 15, 2020.