The DHX Experience is a host of offerings designed to introduce, demystify and inspire creators to pursue working and creating content in the kids, tween and family space. 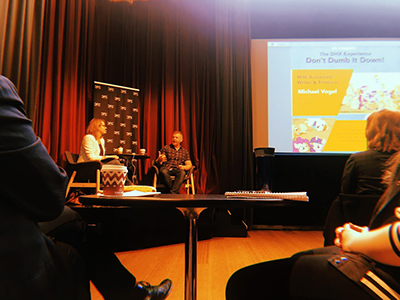 Over the last month, the CFC hosted two DHX Experience events focussing specifically on kids and pre-school animation for television. The first took place on Monday, June 17 with writer-producer-showrunner Michael Vogel of G.I. Joe, My Little Pony and Strawberry Shortcake, and was moderated by Stephanie Betts, DHX Media's EVP of Content. Titled Don’t Dumb It Down, the day focused on demystifying the world of kids animation, exploring its deceptively sophisticated approach, and identifying its global impact.

The second event was on Monday, July 8, when creators, executive producers, showrunners and husband-and-wife team Julie and Scott Stewart of the pre-school series Kate and Mim-Mim and Rev & Roll took the stage for The Preschool Rules. They walked the audience through each step of the preschool animation process, clarifying best practices and delineating strategies for everything from brainstorming new ideas, to prepping and delivering a strong pitch, to engaging a global audience.

Refreshing, accessible and comprehensive – each of these two daylong presentations empowered their audiences to engage, ask questions, glean concepts, and explore the stages of and strategies for the development process for distinct age groups. The daylong intensive structure not only flew by, but ensured participants took a deep dive into their respective topics.

As part of the DHX Experience, the CFC also invited several creators to participate in a two-day original kids animation concept bootcamp with Vogel and a two-day original pre-school concept bootcamp with the Stewarts. Creators were given the incredible opportunity to test out their original concepts and pitches in this intimate intensive with guidance and feedback from our guests.

Below, we’ve selected a few of each session’s key takeaways:

Geeking out is not only cool, but helpful

Mike says that his encyclopedic knowledge of cartoons and comics has been one key to his success in animation, especially in terms of impressing executives in meetings and making connections. For example, when he was first meeting with Sony about working on a Spider-Man property, he “nerd-vomited” a bunch of knowledge about the web-spinning superhero, asking highly specific questions about where they wanted to take the character based on his various journeys in the comics. It’s no surprise he got the gig and ended up working there for years, first as an Animation Coordinator and later as the Director of Animated Programming.

So if you’re passionate about a medium or genre, don’t be afraid to showcase that with employers and peers to prove why you’re the person for the job!

Stay up to date on your medium and genre

One of the things Mike wants creators to remember is that executives and decision makers at studios don’t get “a special newspaper you don’t get.” In other words, you can stay up to date on your medium and/or genre by just following the latest trade publications and watching the shows that people – both creators and audience members – are talking about.

The studios will always be looking for “what’s hot” or trending right now and trying to pounce on it in their own way. Use your industry knowledge to guide your pitches. For example: “This show could be [BUZZY SHOW] meets [CLASSIC HIT]!),” and once again, you’ve showcased your passion for the medium. What’s more, when you do get a meeting with a studio, play to your strengths. Mike says, for example, if you’re a naturally funny person and writer, pitch some comedic ideas first. On the flip side, if you’re not known for your comedy skills but kill at story structure, map out an entire story in that meeting.

Having moved from executive to writer to producer and back, Mike has been on both sides of the notes process. He says that it’s not helpful to see critiques of that pitch or script you slogged over as a personal attack. Quite simply, executives come from a different perspective. They might see something you can’t see, after constantly rewriting or reworking. They might be uniquely positioned to help you make your already good concept truly great.

That said, Mike also says that if you are passionate about a story idea, be prepared to defend it. Clearly explain what works about it and why it contributes to the overarching narrative. Show them why not going in this direction could be a mistake.

Echoing Vogel, Julie and Scott stressed that content creators’ passion for their projects can be their greatest resource – and your best inspiration. The Stewarts’ award-winning series Kate and Mim-Mim is now based in 130 territories globally. Yet it first sparked as an idea because ofScott and Julie’s young daughter Kate and her love for her plushie bunny Mim-Mim. Their newest project, Rev & Roll, kicking off this year on the ABC Family Channel in Canada and YouTube, mashes up their two sons’ twin obsessions – trucks and puppies – by featuring an animated pet truck. For both pre-school properties, the creative imagination of the Stewarts’ own lives enabled them to envision and produce this content.

Really loving what you do and having it resonate deeply – that can see you through the long haul from concept to creation to distribution in animation. Trends will come and go (and sometimes come back again), but you’ll stay the course if what you’re pitching truly matters to you! 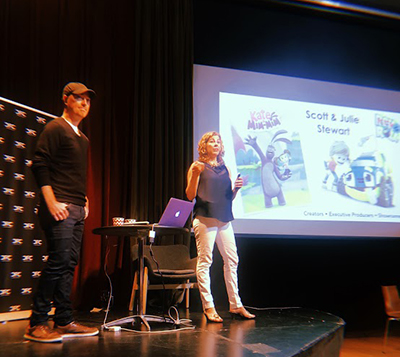 When you’re preparing a pitch, pitching, and of course producing, Julie and Scott both stressed how important it is that you determine what you can and cannot give up on in your series. In other words: make sure you know your show’s core DNA.

As Julie says, “Remember: you work for the show, no one else.” Take in the development executives’ notes, encourage their engagement in the project, and be open to what they have to offer. Then you can fulfil your obligation to make the show you’ve created be the best it can possibly be. But if you feel it spinning into territory where you’ve lost sight of its core values, it’s time to step back, reset, or even kill it.

Julie and Scott tracked the entire step-by-step process of developing and producing the animated pre-school show Rev & Roll, from the first episode concept to a fully-produced episode, noting the challenges, thrills and strategies at each stage. After all, even one single episode can take many months to deliver!

As much as it can be valuable to know the whole process, Julie stressed that your role as the content creator is, first and foremost, to be the “creative visionary.” You are not expected to know and stay on top of every stage. Nor should you be an expert on merchandising or 3D modelling. Your job is to tell the story, build the characters and situations, envision and animate new worlds that truly showcase your imagination. Also, if you’re a new creator, don’t worry if you don’t know or understand every stage. Ask questions and utilize your network to get insights and answers.

Thank you to everyone who attended these sessions, session presenters Mike Vogel and Julie and Scott Stewart, and our esteemed partner DHX Media.

See some of our alumni's recent wins