"This is our movie. It’s owned by the North and the South, owned by community and collective heartache and pain. It’s owned by a hell of a lot of hard work, and by many, many, many energies, hours and people."
- Miranda de Pencier, director of ‘The Grizzlies'

The Canadian Film Centre (CFC) and Ontario Creates were proud to celebrate National Canadian Film Day together on April 17, with a red carpet launch and sneak preview of festival fave and award-winner, The Grizzlies. The private screening and reception took place at Cineplex Cinemas-Yonge & Dundas in downtown Toronto and was one of almost 1,000 film events being enjoyed across Canada on this one festive day. Many of the cast and crew were in attendance at the special presentation, thanks to Mongrel Media and Northwood Entertainment in association with Puhitaq.

National Canadian Film Day has been growing steadily as an annual event that spotlights the breadth of Canadian film. The one-day event takes place every April and is presented by REEL CANADA, a charitable organization that brings Canadian films into schools and to Canadians year-round. This year’s theme, “Celebrating 100 years of Canadian Cinema,” honoured the centennial of Canada’s first genuine blockbuster and oldest surviving feature film, Nell Shipman’s Back to God’s Country, a film playfully noted for being full of “snow and sass."

The Grizzlies roars into theatres nationwide on Friday, April 19, and is based on an inspiring true story of a youth lacrosse team that formed in Kugluktuk, Nunavut in 2004. At last night’s event, several of the film’s cast, crew and producers were in attendance, along with some of the original members of The Grizzlies, who shared their perspectives on seeing their story onscreen, and on the film’s wider tremendous impact on their community.

After premiering to accolades at the 2018 Toronto International Film Festival (TIFF), The Grizzlies went on to win awards across North American film festivals, as well as a Canadian Screen Award (CSA) for Best Original Song and CSA acting nominations for first-time actors Paul Nutarariaq (Zach) and Anna Lambe (Spring). Most recently, it was screened in a pre-theatrical release in the Nunavut communities the film depicts.

CFC Producers’ Lab alumna Miranda de Pencier made her directorial debut on this film, but she has been quick to note what a deeply collaborative project it has been with the community. Indeed, as last night’s event testified, it can offer a model for collaborative filmmaking grounded in advancing and respecting Indigenous communities – and for rejecting tired white saviour tropes. 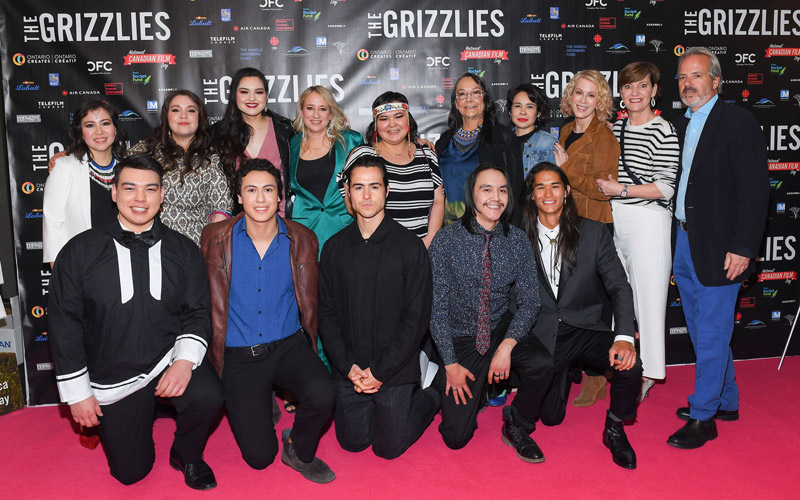 Last night kicked off with a stylish “pink” carpet, where The Grizzlies cast and producers arrived – revealing by the scale what a powerful collaboration this film has been for everyone involved.

Produced over 10 years, The Grizzlies began with de Pencier reading a news item from ESPN on the real-life high school teacher Russ Sheppard. Sheppard came to Kugluktuk and started a lacrosse program there to combat the local teen suicide rate – which at the time was the highest in North America. 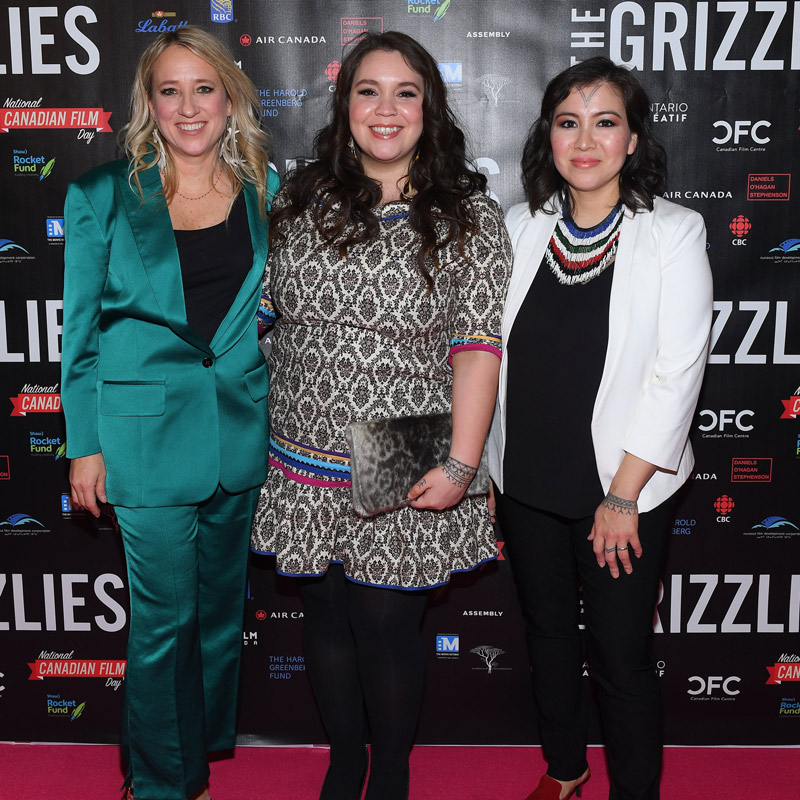 Inspired, de Pencier and her fellow producers, Alethea Arnaquq-Baril and Stacey Aglok MacDonald (who grew up in Kugluktuk and is now based in Iqaluit), held a casting workshop in Iqaluit for Inuit youth across Nunavut in 2009. The aim, however, wasn’t simply about casting actors. The goal was to give something to everyone who attended, to create a true community collaboration in which the youth learned drum dancing, throat singing, painting and more.

At the end of that workshop, Arnaquq-Baril, de Pencier and MacDonald were able to draw from among the youth a set of powerful performances steeped in real-life experiences – all the more inspiring given that many in the film had never acted before. 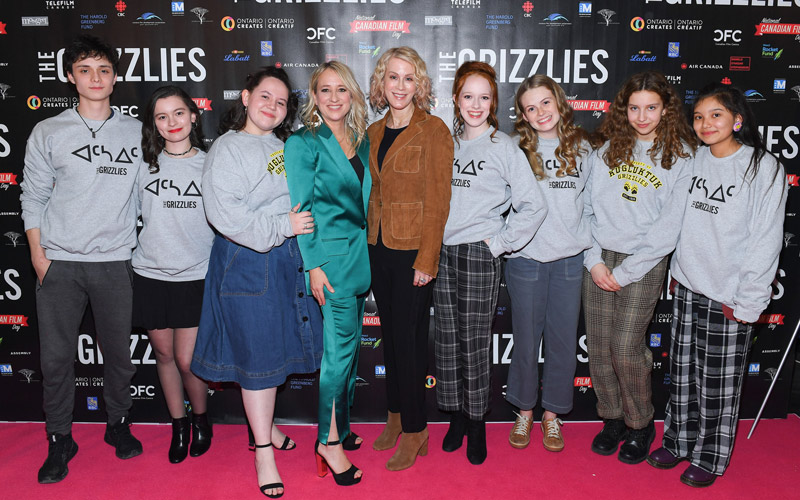 'Anne with an E' cast wearing their Grizzlies sweatshirts. 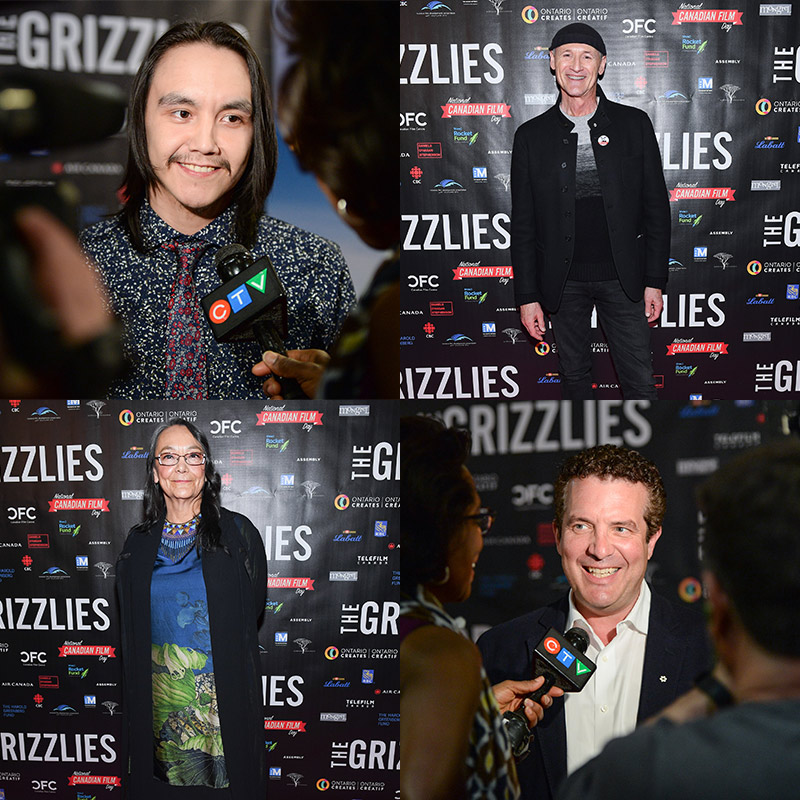 After enjoying a pre-screening reception, guests filled the theatre, a palpable enthusiasm in the air. The event began, movingly, with a performance from throat singers and sisters Emerald MacDonald (who plays the Miranda in the film) and producer Stacey Aglok MacDonald.

Ontario Creates’ Thorne-Stone welcomed everyone, and then de Pencier came to the stage to thank the film’s many makers and contributors, including its audiences.

"The Grizzlies saw greatness in each other and they pushed each other to be extraordinary, They inspired all of us to be the best that we could be while we were making this film. We never wanted to disappoint them, because their story is one of perseverance and strength, of humanity and dignity, of humour and authenticity, or overcoming adversity with resilence and love."

After de Pencier spoke, Arnaquq-Baril and MacDonald paused to point out the presence of Indigenous mental health workers in last night’s audience, available to offer support at any point if audience members needed it. The Grizzlies strives to represent the painful subject of Indigenous youth suicide and wider social problems for these youth in their communities with sensitivity and respect, but also understands how it can be hard to relive trauma. So the producers have made sure that support has been available at every screening of the film, should anyone seek it out. 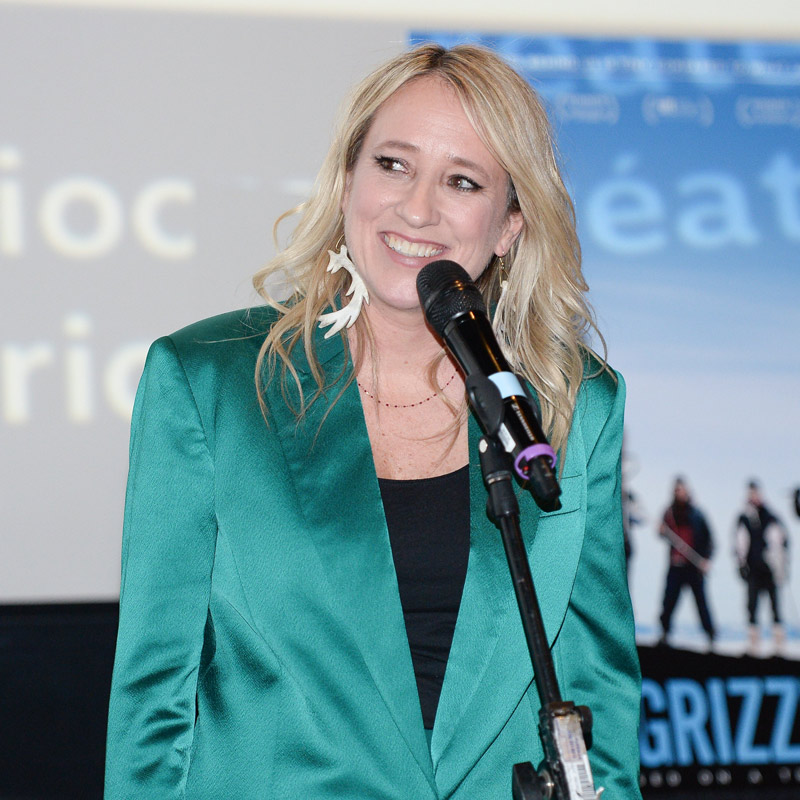 The screening ended with a joyous standing ovation, and was followed by a shout-out to the cast, writers, producers and real Grizzlies in attendance. A fascinating Q&A ensued, where we heard more from not only the film’s cast members (Emerald MacDonald, Paul Nutarariaq and Ben Schnetzer) on how they took on their roles, but also how the real-life Grizzlies (coach Shephard and team members Wynter Kuliktana and Miranda Atatahak) have found the film’s impact transformative. In response to one audience member’s question, de Pencier revealed how the film’s cast and crew were largely Indigenous and based in the North, from script supervisor to soundtrack. 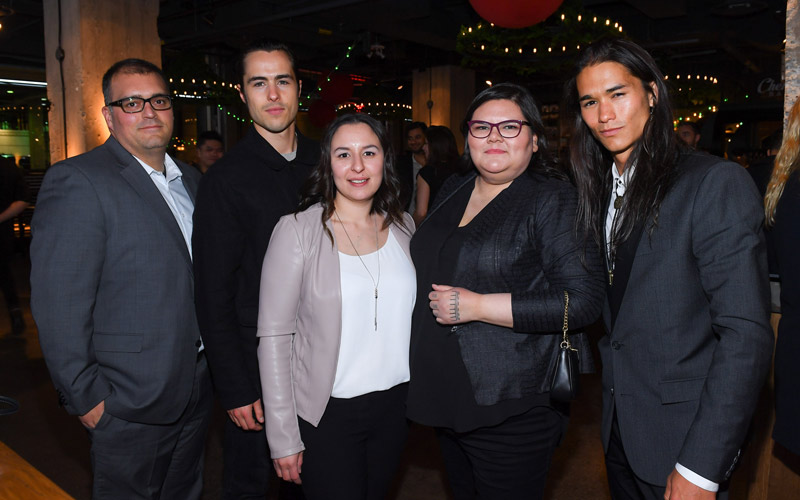 Last night’s event was a powerful, moving conclusion to yet another successful National Canadian Film Day. The Grizzlies directly grapples with the violent legacy of Canada’s treatment of Indigenous people. We at the CFC were proud to partner with Ontario Creates on this evening, also presented thanks to Mongrel Media and Northwood Entertainment in association with Puhitaq. This film’s presence, and the presence of its Indigenous cast, crew and producers onstage, reminds us that National Canadian Film Day must also reimagine and broaden the boundaries of what counts – and should be valued as – Canadian cinema. As last night’s audience and producers revealed, it also broadens our understanding and experience of Canadian storytelling very much for the better.

All photos by George Pimental Photography.