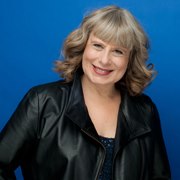 Lesley Krueger is a filmmaker and novelist born in Vancouver and based in Toronto. The author of seven critically-acclaimed books, she is an in-demand screenwriter and story editor. Among her projects currently in development is THE KING OF CAR THIEVES, a Canada-India co-production with director Deepa Sahi and producer Ketan Mehta in India and The Film Works in Canada. The last feature from The Film Works was IN DARKNESS with director Agnieszka Holland, nominated for an Academy Award.

Lesley is also editing her fourth novel, Mad Richard, to be released in March, 2017, by ECW Press in Canada and the U.S. Director Terry Gilliam calls the book “brilliant.”

She has recently completed work on several Canada-based projects. Lesley story edited Stephen Dunn’s first feature, CLOSET MONSTER, which screened at TIFF 2015, where it won the Best Canadian Feature Award. Among the short films she has recently written, HOW TO KEEP YOUR DAY JOB, with director Sean Frewer and producer Lea Marin, played at festivals from Manhattan to France, as well as being nominated for Best Short Film at the Directors’ Guild of Canada 2013 Awards.

Lesley either wrote, mentored or story edited six other produced short films over the past 36 months. She is a 2003 screenwriting graduate of the Canadian Film Centre, founded 25 years ago by director Norman Jewison, and is now a Writer Mentor at the CFC, where she leads workshops for the elite corps of students.

She has done uncredited script-doctoring work on projects for Universal and Sony Pictures in Los Angeles, and producers such as the Oscar-winning Thomas Langmann, who brought THE ARTIST to the screen, Roberto Ciccuto of Italy, who produced HOTEL RWANDA and Andrew Mason, who produced THE MATRIX trilogy. She script doctored the 2006 film SILENT HILL, which earned $100 million at the box office, and was one of the original writers on the TARZAN feature currently in theatres.

Lesley’s most recently published novel is The Corner Garden from Penguin Books in 2003. Her latest non-fiction book, Contender, was published in 2013 as part of the Toronto Star Dispatches series. Lesley lives in Toronto with her husband and is an enthusiastic member of two women’s hockey leagues.