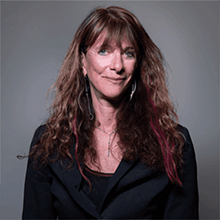 Val is on a mission to enable thriving entrepreneurial communities of communities locally, nationally and internationally based on a triple win practice of partnership, collaboration and iteration.

This practice evolved from the co-founding and execution of the DMZ, launched in 2010, which by 2015 was named the number one University Business Incubator in North America and number 3 in the world. She then left to form The Pivotal Point, to help grow community based incubators worldwide.

Val has over 30 years in the digital world, where she started a graphic design business, and then had the fortunate of being sought by IBM, to be part of their innovation intrapreneurial network, where she led design teams for enterprise software design, was creative director for large experience sites, such as the Sydney Olympics and was awarded 5 patents, including one for the Universal Shopping Cart for the Web (in the top 5% of IBM patents).

Other awards include the Sara Kirke Award for Entrepreneurship and Innovation, the 2016 CNE Woman of Distinction award and the honour of being part of the 2016 Canada Innovation Leaders team.