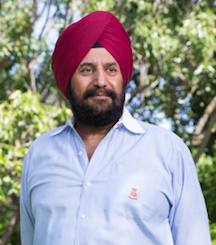 In a career spanning over 30 years with leading innovators of their time such as IBM, Xerox, Apple, Palm and HP, Chahil has been widely acknowledged as a marketing pioneer and a catalyst for driving key global technology and entertainment trends and the convergence of industries.

As a senior vice president of global marketing, he and his team conceived and implemented HP's game changing 'Computer is Personal Again' campaign which drove new innovations and reinvigorated the entire PC industry while establishing HP as the market leader.

At Apple, he founded its New Media division and played a key role in transforming the industry to it's next paradigm, as a consumer necessity. He also served on Apple's Executive Management committee as Apple's global marketing chief and GM of its Entertainment and Internet division.

Chahil has a Master's degree from the Thunderbird Graduate School of Global Management, USA and a Bachelor of Commerce degree from Punjab University, India. He has attended Stanford Law School's Directors College, and key executive management and leadership courses.

He is regularly invited to speak at global industry forums as well as leading educational institutions including Harvard, Stanford, USC, INSEAD and the Sorbonne.