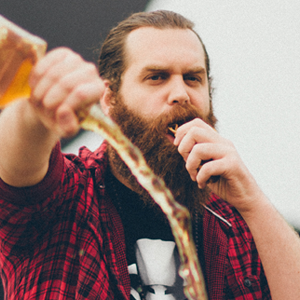 Speaking at Buffer Festival Industry Day on Thursday, October 16 @11:30am

Harley Morenstein, Canadian born Internet host & creator of the YouTube channel Epic Meal Time began his career as a substitute high school teacher in his hometown of Montreal, Quebec. During this time he toiled away in his spare time experimenting with video productions ranging from rap videos to "extremely terrible content that no one should ever see."

Harley finally found his own karat of Internet gold, Epic Meal Time, a high calorie, booze driven online cooking show that was originally spawned out of a "cheat meal" he and his friends created amidst an endeavor to promote health & fitness. When true irony was exactly what the Internet ordered Harley saw the opportunity, and ran with it.

In October of 2010, after only 2 weeks of Epic Meal Time, the number of views were so staggering that Harley was forced to quit his day job, and focus all of his attention on production.

Two years and 100 episodes later he and his Canuck cohorts moved to Los Angeles and turned the heat up to an 11 with their video production company Next Time Productions. 4 web shows, 3 YouTube channels, 2 cook books & 7 million subscribers later the once rusty crew of lumberjacks now have the number 1 online cooking show, and are currently headed to television with 16 half-hour episodes premiering in July 2014 on FYI, a brand new channel under the A&E network.

Epic Meal Time has gone live every Tuesday for the past four years. And even though his spare time is now few and far between Harley can still be found fulfilling his philanthropic lifestyle by inspiring children in new ways via such charities as After School All-Stars. As 2014 brings new horizons, and new endeavours for Harley he plans to continue blurring the lines of censorship and entertainment while taking over every form of new media that exist today.