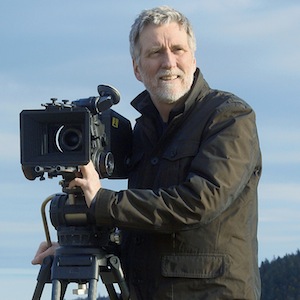 John Charles Walker, cinematographer, director, producer (b at Montréal, 5 July 1952). John Walker is one of Canada's finest director/ cinematographers working in the documentary genre, and his films have won international acclaim. As a young photographer, his work was exhibited and published in books and magazines, and he received several arts council grants. When he turned to filmmaking in 1975, he earned his early credits under the tutelage of the legendary producer Budge CRAWLEY at Crawley Films in Ottawa. His first film, directed and shot in 1982 for Atlantis Films of Toronto, was about the late avant-garde London, Ont artist and filmmaker Jack Chambers.Chambers: Tracks and Gestures won numerous awards at film festivals across Canada and the US.

This began a pattern of creating award-winning films that are personal, lyrical and full of deep understanding of the human condition, while upon occasion shooting documentaries for others. John Walker shotMaking Overtures: The Story of a Community Orchestra (1984; Oscar nominee for best short film) for Rhombus Media and was part of the collective that produced, wrote and directed A Winter Tan (1988), starring Jackie BURROUGHS. It was nominated for 7 GENIE Awards, including best picture and best director, and won the best actress award for Burroughs. Also in 1988, John Walker shot Holly Dale and Janis Cole's Genie-nominated Calling the Shots, and served as executive producer on George Ungar's The Champagne Safari, which won the Genie for best documentary in 1995.

Strand: Under the Dark Cloth (1989), a feature-length documentary on one of John Walker's personal heroes, the American photographer and filmmaker Paul Strand, was a labour of love that took more than 7 years to complete. The Hand of Stalin (1990) was a BBC/October Films-produced series, for which Walker directed and shot the opening 2 of the 3 films: Leningradskaya: A Village in Southern Russiaand Leningrad. Distress Signals (1990) is a critical examination of global television culture and Orphans of Manchuria (1993) looks at the plight of Japanese children left behind in China after World War II.

These projects were followed by Hidden Children (1994), the story of children who hid their Jewish identity during the World War II, andTough Assignment (1996), which filmed 4 teachers for a year in a Toronto high school. Utshimassits: Place of the Boss (1996) was made for CBC's Witness series and tells the painful story of the Mushuau Innu of DAVIS INLET and their struggle to overcome tragedy and the loss of a nomadic way of life. The Fairy Faith (2000) explores the themes of myth and imagination through the transcendental faith some people have in "fairies at the bottom of the garden," and Men of the Deeps(2003) is about the world-famous Nova Scotia coal miners choir and the closing of the last mine in Cape Breton.

Strand: Under the Dark Cloth won a Genie Award for best feature documentary, and John Walker won a GEMINI Award for best director of a documentary for Leningradskaya. Utshimassits: Place of the Bosswon the Donald Brittain Award for Best Social/Political Documentary.Distress Signals, Orphans of Manchuria and Hidden Children were all nominated for the Donald Brittain Award, The Fairy Faith was nominated for a Genie, and Men of the Deeps won 3 Geminis, including best arts documentary and best photography.

In 1982 John Walker, along with Peter RAYMONT and Rudy Buttignol, founded the Canadian Independent Film Caucus (now the Documentary Organization of Canada), a lobby group for point-of-view documentaries. Walker's passionate commitment to the documentary form has led him to work around the world. His films represent the best that the new generation of post-NATIONAL FILM BOARD documentary filmmakers has to offer, and are a natural successor to the lyrical tradition created by Colin LOW.