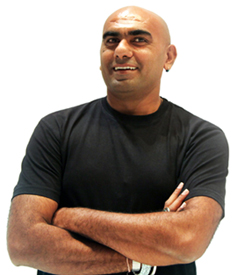 Tahir Mahmood is a Toronto based designer with an incredibly diverse background in creative arts and design. He has been a graphic designer, new media artist and an art director. His last art direction project was for Academy Award nominated director Deepa Mehta in her film adaptation of Salman Rushdie’s “Midnight’s Children.” The sum of all these experiences led him to discover his true passion for product design.

His design philosophy has been inspired by two very contrasting styles. On the one end the clean lines and modernist aesthetic of the 1920’s German Bauhaus movement. On the other end he was influenced by the ornate and grand 16th century Mughal architecture of his Indian ancestry. This juxtaposition of influences has led to his remarkably unique post-modern designs accentuated with a vibrant palette.

He designed his first product in 2009, and in a remarkably short span has multiplied his designs. In 2010 Tahir won the Design Exchange Award for his mortar and pestle and since then has been a rising design star.