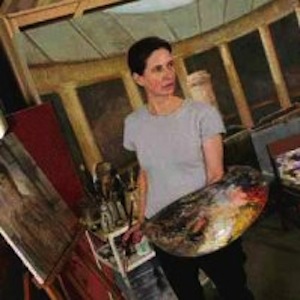 Isabella Stefanescu is a painter, writer and arts activist based in Kitchener- Waterloo. Born in Romania, she studied mathematics, fine arts, and art history at the University of Waterloo, and then spent some formative years drawing and teaching in Britain and France. Back in Waterloo region Stefanescu established an artistic practice in Kitchener and became one of the founding members of Globe Studios, an artist-run centre; and one of the founders of CAFKA.

Isabella made her first tech-art project in 2006, titled The Notebook Project, working in collaboration with Rob Gorbet, Nick Storring and Nathan Saliwonchyk. In 2007 she was awarded the K.M. Hunter Prize for emerging interdisciplinary artists In 2008 Stefanescu was an artist in residence at the Canadian Film Centre Media Lab, and in 2009 at the Banff New Media Institute.

Since her residency at CFC Isabella has created the Euphonopen, an instrument for the live performance of drawing that generates and manipulates sound, and has premiered three interactive media performance works, as part of the 2014 Euphonopen Season presented by Inter Arts Matrix: Signature(at Kitchener City Hall) Objects on a Table (at the Canadian Clay and Glass Gallery) and