Norman Jewison and Lynne St. David-Jewison with Eugene Levy and Slawko Klymkiw at CFC in LA 2013.

Norman Jewison and Lynne St. David-Jewison with Pen Densham at CFC in LA 2014.

Norman Jewison and Lynne St. David-Jewison with Harland Williams and Russell Peters at CFC in LA 2012.

After serving in the Navy at the end of WWII and completing college in Canada, Jewison moved to London in the early 1950s and broke into the entertainment business as an actor/writer with the BBC.

An invitation to join a television training program at the CBC brought Jewison back to Canada. While working for CBC, Jewison wrote, directed and produced some of Canada’s most popular musicals, dramas, comedy-variety shows and specials. His CBC credits include Big Revue, The Adventures of Chich, The Ed McCurdy Show, On Stage, Denny Vaughan, Showtime, The Barris Beat and Wayne & Shuster.

CBS took note of Jewison’s skills and hired him in 1958 to revitalize the live weekly music show Your Hit Parade, and for the next four years, he solidified his reputation working with such artists as Frank Sinatra, Judy Garland, Danny Kaye and Harry Belafonte. His additional CBS credits include The Andy Williams Show, Tonight with Harry Belafonte, The Fabulous Fifties, The Secret World of Eddie Hodges, Danny Kaye Special, Harry Belafonte Special, Judy Garland Special, Pat Boone Show, The Broadway of Lerner and Loewe, and The Judy Garland Show. During this time, Jewison won three Emmy Awards.

Transition from TV to Film

Following his work in TV, Jewison relocated from New York City to Hollywood in 1962 to begin a career in film and to helm his first Hollywood feature, 40 Pounds of Trouble.

The Thrill of it All, directed by Jewison, stars legendary actress Doris Day alongside James Garner in a screenplay by Carl Reiner.

The Art of Love sees Jewison and James Garner work together again in another Carl Reiner screenplay.

The Thomas Crown Affair, directed and produced by Jewison, saw him reteam with both McQueen and Wexler. This film also featured multiple screen effects, including the use of 66 images in one frame for the polo sequence, reputedly a first for a 35mm feature.

Released in the U.K. as Chicago, Chicago, this comedy, directed and produced by Jewison and starring a young Beau Bridges and Margot Kidder, received three Academy Award nominations.

The Landlord was directed by Hal Ashby and based on the 1966 novel by Kristin Hunter. The film stars Beau Bridges and was produced by Jewison.

This 1974 Western film was directed by Ted Kotcheff and produced by Jewison.

In 1975, Jewison helmed and produced the sci-fi thriller Rollerball, scripted by William Harrison from his own short story.

Jewison teamed with screenwriters Barry Levinson and Valerie Curtin for ...And Justice for All, which he directed and produced.

Jewison produced this 1980 war film based on the 1974 novel of the same name by Frederick Forsyth.

Jewison reteamed with Levinson and Curtin for Best Friends, a romantic comedy starring Burt Reynolds and Goldie Hawn, which he directed and produced.

This 1984 film directed and produced by Jewison is based on Charles Fuller's Pulitzer Prize-winning Off-Broadway production A Soldier's Play. The film received much popular and critical success and was nominated for three Academy Awards, including Best Picture.

Jewison’s next stage-to-film adaptation was Agnes of God. It was his first feature filmed in Canada and also marked his initial collaboration with cinematographer Sven Nykvist. Jewison directed and produced this film.

Moonstruck is one of Jewison’s most beloved films, which he directed and produced, and was received with wide critical and popular acclaim. The film was nominated for six Academy Awards, including Best Picture and Best Director for Jewison, and won three Academy Awards, including Best Actress for Cher, Best Supporting Actress for Olympia Dukakis and Best Original Screenplay for John Patrick Shanley.

In Country, directed and produced by Jewison, received its world premiere at the Toronto International Film Festival. Star Bruce Willis attended the premiere, which he dedicated to Canadian war veterans who fought in the Vietnam War.

Jewison produced this comedy/thriller, directed by Pat O'Connor from a screenplay by John Patrick Shanley.

Other People’s Money, directed and produced by Jewison, marks his third collaboration with director of photography Haskell Wexler.

Jewison reteamed with director of photography Sven Nyvist in Only You to provide a lush Italian backdrop for the film, which he directed and produced.

Jewison served as executive producer on Bruce McDonald's feature Dance Me Outside, set on the Kidabanesee reserve in Northern Ontario.

Jewison was executive producer on this British short film directed by John Boorman, which screened in the Un Certain Regard section at the 1995 Cannes Film Festival. 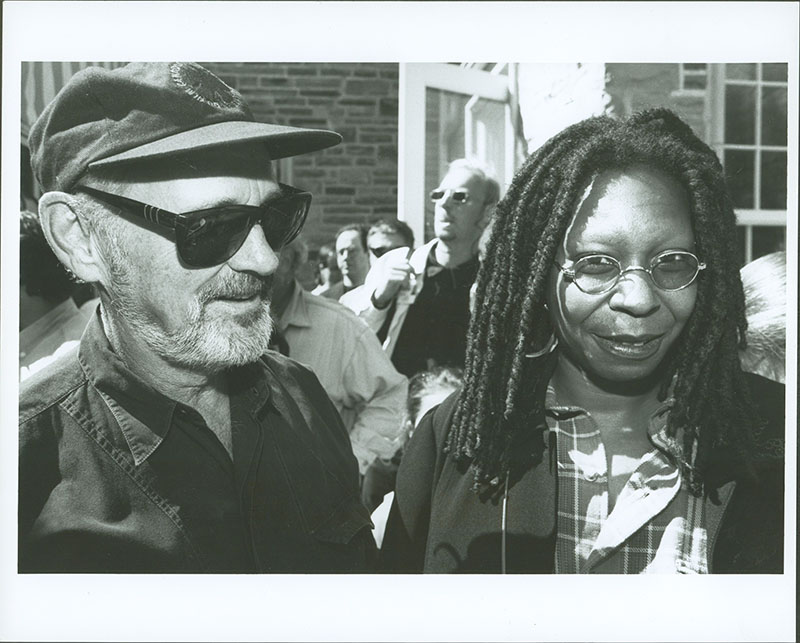 Jewison executive produced this Canadian television series, which aired on CBC-TV from 1996 to 1998.

In 1999, Jewison received the prestigious Irving Thalberg Award at the Academy Awards.

In 1999, Jewison produced and directed Hurricane, starring Denzel Washington as Reuben 'Hurricane' Carter, the 1960s world middleweight boxing champion who was unjustly convicted of the murder of three white men in a New Jersey bar. The film earned Washington an Academy Award nomination for Best Actor.

Norman Jewison on Comedy in the 20th Century: Funny Is Money (1999)

Jewison helmed and executive produced this feature-length documentary for Showtime, using the hype surrounding the finale of the wildly successful series Seinfeld (NBC) as his launchpad.

Jewison directed and produced The Statement, which stars Michael Caine and is based on a 1996 novel by Brian Moore.

Michael Caine and Norman Jewison on the set of 'The Statement.' Photo credit: Jerome Prebois, courtesy of Serendipity Point Films

On his filmmaking inspiration:

On the importance of film:

“Film has become the literature of this generation. Canada’s cultural distinction and survival depend on its ability to master the medium and command a place on the screens of the world.”